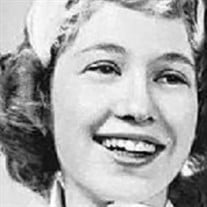 Mary J. Farinelli, 89, of Ravena, died peacefully surrounded by her children on April 12, 2022, after a long illness. She was born Julia Mary Tierney on July 23, 1932, to the late Etta (Matthews) and Michael Tierney in Saranac Lake, N.Y. Mary graduated from Saranac Lake High School in 1949. She attended the Cincinnati Conservatory of Music, then transferred to the State University of New York College at Oneonta, where she earned her Bachelor of Science degree in education in 1954. In 1950, Mary's family moved to Ravena, where her mother, Mrs. Etta Tierney, became an elementary teacher. While attending college, Mary spent her summers working in Forman's Clothing Store on Main Street, where she met her future husband, Robert P. Farinelli Sr., after short-changing him on a pair of shoes. Mary and Bob married in 1955 and had five children: Robert Jr., Timothy, Katherine, Jill, and Elizabeth. Mary spent the majority of her teaching career in the RCS School District (1969-1992). She taught grade two at Ravena Elementary and later at Pieter B. Coeymans Elementary. After she retired, she enrolled in The College of Saint Rose, earning a master's degree in English and graduating with honors in 2001. Mary enjoyed many hobbies and always had one or more projects in the works around the house. Her hobbies included embroidery and cross-stitch, collecting and restoring antiques, reading, and gardening. She sewed many dresses for her daughters when they were young. In her later years she enjoyed attending lectures and concerts, visiting historical sites, going out to lunch with friends, and visiting her children and grandchildren in four different states. Mary was a founding member of the Ravena Coeymans Historical Society. From 1998 to 2018, she served in various roles: museum curator, trustee, founder and editor of the society's newsletter, vice president, corresponding secretary, chairperson of publicity and programs, and creative director of exhibits. She spent innumerable hours researching the history and architectural styles of houses in the Town of Coeymans and writing articles about her findings in The Hitching Post newsletter. Mary was predeceased by her husband; her sister, Ann McColgan; her son Timothy Farinelli; and two grandchildren, Christopher Farinelli and Gregory DiNuzzo. She is survived by four of her children and their spouses: Robert Jr. and Margaret Farinelli of Lexington, Ky., Kathy and Vincent Vagnini of Clifton Park, Jill Farinelli and Sean Adam of Wrentham, Mass., and Betsy and Kevin O'Reilly of Stamford, Conn. She leaves behind eight grandchildren and three great-grandchildren. Visitation will be held at the Babcock Funeral Home in Ravena on April 18, from 5-7 p.m. A funeral Mass will be celebrated in St. Patrick's Church in Ravena on April 19, at 10 a.m., followed by burial in St. Patrick's Cemetery in Coeymans. Family and friends are invited to join Mary's children for refreshments after the funeral. In lieu of flowers, the family requests donations be made to The Alzheimer's Association or the Ravena Coeymans Historical Society.

Mary J. Farinelli, 89, of Ravena, died peacefully surrounded by her children on April 12, 2022, after a long illness. She was born Julia Mary Tierney on July 23, 1932, to the late Etta (Matthews) and Michael Tierney in Saranac Lake, N.Y. Mary... View Obituary & Service Information

The family of Mary J. Farinelli created this Life Tributes page to make it easy to share your memories.

Send flowers to the Farinelli family.