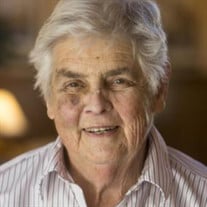 Religious of the Sacred Heart, Mary Helen McComas died December 31, 2021, in Albany, New York. She was eighty-eight years old and a member of the Society of the Sacred Heart for sixty-eight years. Mary Helen was born on May 21, 1933, in Baltimore, Maryland, the only daughter of Louis Gough McComas and Elizabeth Rainsford McComas. She was a 1951 graduate of Eden Hall, Convent of the Sacred Heart, in Torresdale, Philadelphia, and a 1964 graduate of Newton College of the Sacred Heart, where she earned a BA in Education. Mary Helen entered the Society of the Sacred Heart in 1953. She pronounced her first vows in 1955 at Kenwood, Albany, New York, and on February 4, 1961, made her final profession in Rome. Sister McComas taught at Stone Ridge School of the Sacred Heart in Bethesda, Maryland, from 1956 until 1959, afterward at Newton Country Day School of the Sacred Heart until she left for probation in 1960. After her profession, she returned to Newton in 1962, teaching science until 1967. At this point, Sister McComas’s ministry changed from teaching to business management. In 1968, she returned to Stone Ridge where she served as the assistant business manager and also taught. After one year, she became the business manager at the school. Following a sabbatical, Sister McComas served in the offices of the former Washington Province in Boston for one year in 1981 as the assistant provincial treasurer. From 1982 until 1988, she served as business manager, first at Sacred Heart Schools in Chicago, and then at Carrolton School of the Sacred Heart in Miami. Beginning in 1989 until 1995, Sister McComas served as the assistant to the treasurer of the Society, living at the motherhouse in Rome. In 1995, she returned to the U.S. and worked in the development office at Duchesne Academy in Houston. She remained at Duchesne until 2004, serving as business manager and later as assistant to the business manager. While at Duchesne, Sister McComas participated in the Houston Senior Olympics, competing in the 65-69 age group, earning four gold medals, five silver, and three bronze. The medaled categories were in the 100-meter dash, cycling, the two-mile walk, throwing distance with a football and softball, shot put, and basketball free throw, shooting baskets from various positions on the court. When questioned about her athletic ability, Sister McComas credited growing up between two brothers and her daily fourteen-mile round-trip bicycle ride to work. Sister McComas served as area director for Houston for a number of years, and later as coordinator of the Redwoods, a part of the Menlo Park area. During the consultation process for Houston, her sisters mentioned that she was a good listener, responsive, open, kind, and had a sense of humor. A letter from her provincial thanking Sister McComas for her work at Duchesne Academy and in the area reads, “You have a wonderful capacity to go about your work and to live out your relationships with a kind of ease and generosity…You have a way of empowering other people…You have a capacity to foster mutuality and reciprocity among the members of the Area.” Sister McComas left Duchesne in 2004 for Oakwood, the retirement community of the Religious of the Sacred Heart in Atherton, California, where she served as the community’s business manager until 2012. At the age of seventy-nine, Sister McComas officially retired to Albany, New York, where she joined the Avila Community. She enjoyed many happy years there and was dearly loved. As her health deteriorated, in 2020, Sister McComas moved to Teresian House to receive the care she needed. At that time, the community had restrictions on visitors on account of the pandemic, but that did not stop her from connecting with the other RSCJ in her new community. She would often take them in their wheelchairs to lunch or sit and visit with someone during meals. Her good nature and kindness were a blessing to others, even as her own health continued to deteriorate. On December 31, 2021, Sister McComas peacefully went to God. A funeral Mass will be celebrated at St Francis of Assisi Church on Second Avenue, Albany (formerly St John/St Anne’s — Kenwood’s parish) on Friday, March 25 at 10:30 AM followed by burial in the Kenwood cemetery.

The family of Sr. Mary Helen McComas RSCJ created this Life Tributes page to make it easy to share your memories.

Send flowers to the McComas family.