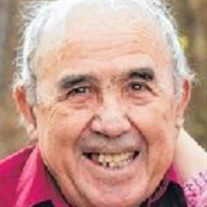 Matteo Morra, 85 of Wynantskill, died peacefully on May 5, 2022, while surrounded by loved ones who will continue to honor his legacy. Matteo lived a humble, yet full life that spanned across two continents, and brought his family to the United States. Matteo was born on March 10, 1937, to Rocco and Marianna Morra in Monteleone - a small town in the Puglia region of Southern Italy, near the city of Foggia. As a young man, he was conscripted into the Italian military, faithfully serving in Trieste. Upon his honorable discharge from the Italian military, Matteo returned to his hometown of Monteleone and married Josephine Cornacchia on October 29, 1962. Matteo and Josephine moved north to Milan, and soon welcomed their two sons, Angelo and Marino. While many members of the Morra family made their way to Toronto, Ont., Matteo and Josephine decided that the United States was where they wanted to start a new life; and so, in 1969, they arrived in Troy with their two young sons. Matteo and Josephine built a successful life for their boys, starting with not much more than the two suitcases they brought with them from Italy. Having a talent for metalworking and machining, Matteo quickly found work. He was employed many years at Albany Steel in Menands, and retired in 2002. He enjoyed his work and friendships immensely, so continued to work part-time until 2016. Matteo was outgoing, and made friends easily. He will be remembered as someone who was always quick to lend his skills to help others. Matteo was predeceased by his parents, and sister Maddalena. He is survived by his wife of 59 years, Josephine Morra; sons, Angelo Morra and his wife Deborah, and Marino Morra and his wife Katherine; grandsons, Joshua Morra and Marcus Morra; and granddaughter, Genevieve Morra. He is also survived by his sister, Ida (Morra) Fiorino of Toronto, Ont. Services will be held at the Bocketti Funeral Home, 336 Third St., Troy on Tuesday, May 10, at 8:15 a.m. A Mass of Christian Burial will take place in St. Jude The Apostle Church, 43 Brookside Ave., Wynantskill at 9 a.m., with interment to follow in St. Mary's Cemetery, Troy. Friends and relatives are invited to attend, and may also call at the funeral home on Monday, May 9, between 4 and 7 p.m. In lieu of flowers, the family requests donations be made to Samaritan Hospital and The Eddy Foundation, an organization dedicated to providing quality healthcare and other related services in our community.

Matteo Morra, 85 of Wynantskill, died peacefully on May 5, 2022, while surrounded by loved ones who will continue to honor his legacy. Matteo lived a humble, yet full life that spanned across two continents, and brought his family to the United... View Obituary & Service Information

The family of Matteo Morra created this Life Tributes page to make it easy to share your memories.

Send flowers to the Morra family.