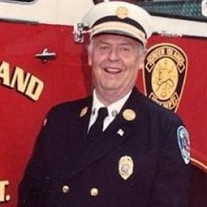 Retired Fire Chief Michael F. Carlow, Sr., 78, G.I.F.D, passed away Sunday, December 12, 2021 on the eve of his 79th birthday at St. Peter’s Hospital in Albany with his family at his side. He was born in Green Island on December 13, 1942, the son of the late James Edward and Esther Malm Carlow. A lifelong resident of the Village of Green Island, Mike was a graduate of Heatly School. Growing up, his happiest times were working with his father at Carlow’s Garage on Arch Street in Green Island. Mike was appointed to the Green Island Fire Department in 1962 and served as Fire Chief from 1988-2005 when he retired with 43 years of service to the village. During that time, he also worked various jobs in the village whether it was reading the electric meters, driving a snowplow or assisting with the Green Island Power Company, Mike enjoyed being active in his community. He was a charter member of the Green Island Professional Firefighters Association Local 3418. He was a member of the NYS Association of Fire Chiefs and was involved in the original formation of the mutual aid system utilized currently. He was a communicant of the former St. Joseph’s Church in Green Island and currently is a communicant of St. Anthony of Padua Shrine Church in Troy. Mike loved fishing at his camp on Saratoga Lake always chasing the great walleye. He was an avid Notre Dame football fan who never missed a game. He enjoyed betting on the races at Saratoga Flat Track. Mike was a great cook and was well known for his potato salad, meatballs and his chili sauce canned every fall. Most of all, his greatest joy was his grandchildren. He was the beloved husband of 58 years of Carol Haverly Carlow; loving father of Cathy (Bill) Croson of Brunswick, Ellen Fulcher (Michael Breith) of St. Charles, IL, Dr. Peggy Carlow (Sheldon McCullum) of Coral Springs, FL and Michael F. (Michelle) Carlow, Jr. of Troy; proud Pop and Grandpa of Joseph, Matthew and Catie Croson; Cara, Amy, Leta, Kaley and David Fulcher and the late Alisa Fulcher; C.J. and Makayla McCullum; Michael F. Carlow, III, James and Emily Carlow; brother of Carol (Emerson) Gilbert; brother-in-law of Anne (late John) Burnett and Ferdinand (Dorothy) Haverly and the late Joan (James) Ashton; close family friend of Gustave Berger of Green Island. The funeral with full departmental honors by the Green Island F.D. will be Friday at 8:30 am from the Parker Bros. Memorial, 2013 Broadway, Watervliet and at 9:30 am at St. Anthony of Padua Shrine Church in Downtown Troy. Interment will follow in St. Mary’s Cemetery, Troy. Relatives and friends are invited and may call at the funeral home on Thursday from 4-7 pm. Masks are required. In lieu of flowers, contributions may be made to St. Jude Children’s Research Hospital, 501 St. Jude Place, Memphis, TN 38105 (stjude.org) or to the National Fallen Firefighter’s Foundation, PO Drawer 498, Emmitsburg, MD 21227 (firehero.org) or to the charity of one’s choice. The family will have a celebration of Mike’s life after the Covid crisis is over.

The family of Michael F. Carlow created this Life Tributes page to make it easy to share your memories.

Send flowers to the Carlow family.