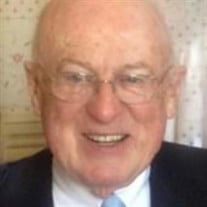 Michael Edward Fleming, D.D.S., 91, was born into eternal life on Sunday, June 19, 2022, at St. Peter!s Hospital with his family at his bedside. Born in Troy, NY on July 22, 1930, he was the son of the late John L. and Loretta Burke Fleming. He was married to his loving wife, Margaret Doyle, for 56 years. Dr. Fleming practiced orthodontics in the Troy area for approximately 40 years. He graduated from La Salle Institute, received a B.S. from Siena College, a D.D.S from the University of Maryland Dental School and received a certificate of training in orthodontics from Columbia University. He served in the U.S. Naval Dental Corps as Lieutenant Senior Grade. He was a fellow of the American College of Dentists, a lifetime member of the American Association of Orthodontics and the American Dental Association, as well as a long-time member of the Troy Dental Study Club. Dr. Fleming was passionately involved in his community throughout his career and into retirement. He was inducted into the Knights of Malta in 1975. He graciously received Letters of Benefaction from the Christian Brothers community at the LaSalle Institute in 1995, making him an honorary Brother of the Christian Schools. At the La Salle Institute, he served on the Board, receiving the Distinguished Alumnus award in 2003, and went on to serve as an Honorary Trustee. Dr. Fleming also served on the boards of the Troy Boys Club, the Troy Club, where he also served as president, and the La Salle School Albany where he was Trustee Emeritus. He was especially proud of the work he accomplished in the 11 years he served on the Board of Trustees of Hudson Valley Community College. For many years, Dr. Fleming served on the boards of the Troy Savings Bank, the Troy Savings Bank Charitable Foundation and the Troy Savings Bank Music Hall Foundation. As a man of deep faith, Dr. Fleming was an active parishioner of St. Pius X, Loudonville, NY, also volunteering as a eucharistic minister at Albany Memorial Hospital for many years. He was also a member of the Senior Advisory Community of Our Lady of Hope Residence, where he received the Distinguished Service Award in 2004. Dr. Fleming was a dedicated member of the Fort Orange Club, Albany, NY, and the Country Club of Troy. Dr. Fleming relished with great parental pride, hopefully quietly, the academic and athletic achievements of all of his grandchildren. He loved to do the daily crossword puzzle, enjoyed a good V.O. Manhattan now and then, probably more now than then, and was a long-suffering fan of the Baltimore Orioles. He enthusiastically followed the growth and maturation of Siena College, helping to establish the Rev. Joseph P. Conway Memorial Scholarship in honor of his pastor and dear friend. In addition to his wife, Margaret, of 56 years, Dr. Fleming is survived by his two daughters and their husbands, Erin Ann Puleo (James V., M.D.), Margaret Mary (Peggy) Fritz (Robert F.), and seven beloved grandchildren: Brigid Burke, James Michael (Madeleine K. Cleary), and Sean Fleming Puleo; Mary Catherine, Margaret Ann, Michael Fleming, and Kevin Robert Fritz. He is also survived by many cherished nieces and nephews including Kathleen Veit, Sister Constance Veit, L.S.P., Karen Scotti, Eric Veit, Ann Leddy, Susan McDowell, Margaret Finlay, and their families. He was predeceased by his parents and siblings, Mary Lourdes Veit (William E. Veit) and John J. Fleming. He was also predeceased by his sister-in-law, Mary Doyle Hunt (William E. Hunt). A funeral Mass of Christian Burial will be celebrated on Friday, June 24, 2022, at St. Pius X. Church at 11:00am, with a private viewing prior to the ceremony. The Rite of Internment will immediately follow at St. Agnes Cemetery, Menands. In lieu of flowers, contributions to the Msgr. Joseph P. Conway Scholarship Fund at Siena College or the Brother William Spellman Scholarship Fund at the La Salle Institute would be greatly appreciated. https://www.lastingmemories.com/michael-e-fleming

The family of Michael E. Fleming created this Life Tributes page to make it easy to share your memories.

Send flowers to the Fleming family.