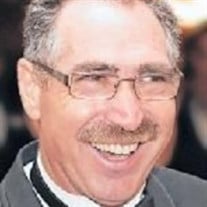 Michael Lo Porto, 70 of Troy, entered into eternal life on Thursday, February 24, 2022, at Albany Medical Center, surrounded by his loving family after a three-and-a-half-year courageous battle with multiple myeloma cancer. Michael was born February 12, 1952, in Santa Caterina Villarmosa, Sicily, Italy, to Carmelo Lo Porto and Francesca Nicosia. Growing up in Sicily with his siblings, Michael was well known in his hometown for his big personality, soccer skills, wit, and intelligence. He made many lifelong friends, played trumpet in his hometown procession, and learned how to cook from his grandmother. He came to the U.S. on July 7, 1970, at 18 to start his life in America with $15 in his pocket. He started working right away in construction, and dabbled in everything from being a disco instructor to working in pizzerias, becoming a hair salon owner, and eventually working in many restaurants coast to coast. His strong work ethic led Michael to become a restauranteur himself. In 1985, he opened his first restaurant, Michael Anthony's, and later opened a second location, Michael Anthony's II, which became LoPorto's on the Lake in Lake George. In 1996, he owned and operated Lo Porto at the Sign of the Tree in the Empire State Plaza for ten years. In 1987, he and his brother started LoPorto's Catering, and in 1991, they opened LoPorto Ristorante Caffe, an authentic Italian restaurant, the first five-star restaurant in the Capital District, quickly becoming a staple in Troy and a place he called home. LoPorto Ristorante Caffe, will continue through his nephew Carmelo, his apprentice since the age of 11. He was also known for catering fabulous large-scale events and owned other businesses throughout his life as Michael was a true entrepreneur. Michael was a Certified Executive Chef, AAC, and President of the American Chef Association. He was honored as chef of the year in 1995 and hosted numerous Escoffier dinners. He cooked for celebrities, including Julia Child's retirement at the Waldorf Astoria in New York City, Martin Scorsese in his own restaurant in Troy, many other celebrities and politicians, and was a guest of the White House as he made ornaments for the Christmas tree during the Clinton administration. Michael was inducted into the National Academy of Chefs in 1997, was a two-time time host of the prestigious Chaine des Rotisseur and was the winner of over two dozen Gold, Silver, and Bronze ACF Medals. He created Cuisine Magic, serving as honorary event chair which helped raise millions of dollars for the Eddy Visiting Nurses. He served a term as Troy City Council Member at Large with the Working Families Party and the Democratic Party. He was a Kokorokan karate black belt, loved to watch and play soccer with his friends until his 60s, foraged mushrooms, played cards with his friends at the coffee shop, enjoyed hunting, and loved gardening, planting many fruit and lemon trees. He loved sitting in front of the restaurant with friends and family, smoking a cigar, drinking espresso, entertaining customers, and made everyone who walked by feel like part of the family. Most of all, he loved to help others, especially those in need. Michael's most significant and proudest accomplishment was his family. He loved his wife, two daughters, and two grandsons with all of his heart and saw them all every day. The love he had for his family and friends was endless. He was the definition of a people person and would light up a room with his larger-than-life presence. Michael is survived by his beloved wife of 36 years, Lena Lombardi Lo Porto; loving daughters, Francesca (Zachary) Lo Porto-Brandow and Lidia Lo Porto; grandsons, Giovanni Michael and Giuliano Brandow; siblings, Salvatore (Antoinette) Lo Porto of Averill Park, Rosetta Lo Porto, Graziella Lo Porto (Ralph Corvino) of Italy; and his uncle, Michael (Grazia) Nicosia of California; and sister-in-law Anna (Charles) Hunt. Michael is also survived by many nieces, nephews, family, and friends. Michael and his family want to thank the doctors and nurses at Memorial Sloan Kettering Cancer Center, Albany Medical Center, and the Sylvester Comprehensive Cancer Center at the University of Miami Health System. Family and friends are invited and may call on Thursday, March 3, from 3 7 p.m. at St. Anthony of Padua Church 28 State St., Troy. Masks are required regardless of vaccination status. Funeral services will be held on Friday for close family and friends at 9:30 a.m. in St. Anthony of Padua Church with Fr. Richard Donovan officiating. Interment will follow in St. Mary's Cemetery, Troy. In lieu of flowers, donations in Michael's memory are appreciated. They may be made to Landgren Myeloma Service Fund, Sylvester Development, in memory of Michael Lo Porto, P.O. Box 016960 (M867) Miami, Fl. 33101. Or online http://Miami.edu/givesylvester , please select Multiple Myeloma and Systemic Light Chain Amyloidosis. Arrangements by; Wm. Leahy Funeral Home and Bocketti Funeral Home, Troy, NY.

The family of Michael Lo Porto created this Life Tributes page to make it easy to share your memories.