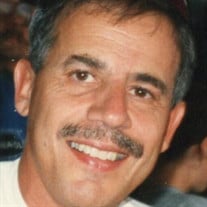 Michael, beloved husband, father, brother, and friend to many passed away on August 11, 2021. Born on October 14, 1942 to the late John and Olga Sardella, Mike lived most of his life in Schenectady. After graduating from Mt. Pleasant High School in 1960, Mike enlisted in the US Air Force, where he served until 1964. He was employed by New York State. He met his wife while working at the NYS Dept. of Labor and spent most of his career at the NYS Dept. of Tax and Finance, where he made many friends whose company he continued to enjoy throughout his retirement. An accomplished volleyball player, Mike was active in the Capital District volleyball community and beyond for over 50 years. He could fairly be described as a founding father of volleyball in the Capital District through his lengthy career playing, coaching, refereeing, and advocating for the sport he loved. A fierce and skillful competitor on the court, he made countless friends off the court. He left an indelible mark on volleyball, and on the many good friends he made. Mike shared his love of life and sharp wit with all who had the pleasure of knowing him. He was a kind and gentle man with an enormous heart who spent much of his life taking care of others. He passed his passion for Yankee baseball on to both of his children - it's more fun to enjoy the games with family. He was also a lifelong and long-suffering Detroit Lions fan. He was a member of the Italian American Community Center, where he enjoyed playing bocce with his father and other family members. He loved the beach and enjoyed many family vacations in Wildwood, NJ as well as cruises around the Caribbean and Mediterranean with his wife. Mike was predeceased by the love of his life and wife of 39+ years, Jennie. He is survived by his daughter Michelle (Tom) of MA, his son John of CT, and his sister Antoinette (Jim) Lechowicz of Schenectady. Mike will be missed by many, but is now reunited with his beloved wife. A private service will be held.

Michael, beloved husband, father, brother, and friend to many passed away on August 11, 2021. Born on October 14, 1942 to the late John and Olga Sardella, Mike lived most of his life in Schenectady. After graduating from Mt. Pleasant High School... View Obituary & Service Information

The family of Michael P. Sardella created this Life Tributes page to make it easy to share your memories.

Michael, beloved husband, father, brother, and friend to many...

Send flowers to the Sardella family.