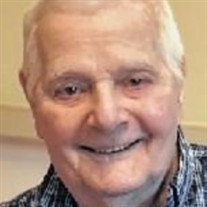 Natale "Ned" J. Lima passed away peacefully, at the age of 95 in Guilderland, on February 15, 2022. He was a resident of Our Lady of Mercy Life Center for four years and one day; prior to that, he resided in Colonie and Albany for most of his life. Ned was born to Rose Coniglio Lima and Natale Lima on November 8, 1926, in Bridgeport, Conn. In the 1950s, he opened and ran Ned's Box Lunch on Broadway in Albany, though he spent most of his life working as a salesman for McKesson and Jabar. He called on many of the independent pharmacies throughout the North Country and was known as an honest, trustworthy businessman. After retiring from Jabar, he was employed by New Visions (Albany ARC) where he worked until he was 88 as a driver, transporting clients to and from work each day. Ned was a kind and gentle soul who loved to spend time with family and was dedicated to making sure that everyone had all that they needed. He was a great cook and was known mostly for his sauce and meatballs - nothing gave him more pride than to teach family how to make it the way he did. He enjoyed having people over for home cooked meals and understood the importance of family dinners to gather. He also loved to fish and spent time with his grandson Frank showing him how to catch a few. He taught many of the kids how to play checkers and cards - always being careful to not let you get good enough to beat him. He also told some of the corniest jokes and loved to make people smile or laugh. He was a "gold" card member for most department stores - Sears and Boscovs to name a few, always getting the best deals when he made a purchase. He was a devoted Roman Catholic, serving in various capacities over the years. Most importantly, Ned was a caring, dedicated husband, father and grandfather to all of us and he will be remembered by all who knew him. His smile will never be forgotten and brought comfort to many over the years. Ned was predeceased by his wife, Barbara Connery-Lima who passed away in 2019, and his previous wife, Rosemary Lima. He was also predeceased by his sister, Nancy Canton. Ned is survived by his daughter, Natalie Applebee; and had numerous stepchildren and step-grandchildren, though he always cherished and treated all of them as his own throughout his life: Lena Parnell, Georgeanne Meeneghan (Richard), Joe Faragon, Debbie Faragon, Teresa Rappold (Chris), Maribeth White (Dan), Frank Faragon (Kathleen), and John Faragon (Colleen). He was predeceased by William Faragon and James Parnell. He was a generous and loving grandfather to Andrea Applebee, Gina Applebee, Frank Maio (Mary), Christina Bridger, Cory Faragon, Nicholas Faragon, Natalie Faragon, Justin Rappold, Jeffrey Rappold, Aidan White, Alexandra Faragon, Victoria Faragon, Sarah Faragon, Ava Faragon, Grace Faragon, Christina Holt, Malinda Lasher, and Rose Marie Meeneghan. Ned was also great-grandfather to Jared Bridger. He is survived by his niece, Lisa Canton; and nephews, Joseph Canton, Jr. and Steven Canton. He is also survived by his daughter, Diana Fish (Marc) and numerous other family members also survive. Relatives and friends are invited to visit with Ned's family on Friday, February 18, from 4 to 6 p.m. at the McVeigh Funeral Home, 208 North Allen St., Albany. Please only enter the funeral home from the rear parking lot entrance. Unvaccinated individuals must wear a mask and practice social distancing. Funeral services on Saturday, February 19, at 9 a.m. in the Blessed Sacrament Church, 607 Central Ave. (Father John Bradley Way), Albany, where his funeral Mass will be celebrated. To view the Mass, please go to the Facebook page for Blessed Sacrament Catholic Church and click on Events or visit www.blessedsacramentalbany.org. The Rite of Committal will be held in St. Agnes Cemetery, Menands, immediately following the funeral Mass. Donations may be made to the Regional Food Bank, or to Blessed Sacrament Food Pantry.

Natale "Ned" J. Lima passed away peacefully, at the age of 95 in Guilderland, on February 15, 2022. He was a resident of Our Lady of Mercy Life Center for four years and one day; prior to that, he resided in Colonie and Albany for most of his... View Obituary & Service Information

The family of Natale "Ned" J. Lima created this Life Tributes page to make it easy to share your memories.

Natale &quot;Ned&quot; J. Lima passed away peacefully, at the age of 95...

Send flowers to the Lima family.