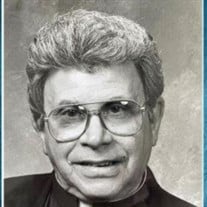 Father Nello A. Barachini passed away on Friday afternoon, May 20, 2022. He was 94 years of age. “Please pray for the repose of the soul of Father Barachini and for the consolation of his family,” said Bishop Frank J. Caggiano. Fr. Barachini was known to many in the Bridgeport area as former chaplain of Bridgeport Hospital. Nello Barachini was born in Albany, NY, on February 18, 1928, son of Louis and Maria Barachini. He was baptized at Saint Anthony Church in Albany and confirmed at St. Joseph Church, also in Albany. He attended Saint Joseph Academy School and Bethlehem Central High School. Father Barachini served in the United States Navy and as 2nd Officer in the US Merchant Marines for over 25 years prior to entering the Vincentian Order. He studied theology at St. Joseph Seminary in Callicoon, NY, Holy Apostles Seminary in Cromwell, CT and the Angelicum in Rome. Father Barachini was ordained to the priesthood on October 11, 1986 by Most Reverend John F. Hackett at Saint Michael Church in Derby. Following his ordination, his first assignment as a Vincentian priest was at Saint Stanislaus Church in New Haven, CT from 1986-1989. Next, he was transferred to Saint Michael Church in Derby, serving until 1991. At that time, he formally requested incardination in the Diocese of Bridgeport as well as release from his vows as a Vincentian. In 1992, he was appointed the Chaplain at Bridgeport Hospital, residing at St. Ambrose Church. Father served at Bridgeport Hospital for 14 years. After three years of service, Father’s request for incardination was granted in November of 1994. Father Barachini served at St. Jerome Parish in Norwalk in his first assignment in the diocese. He also resided at St. Margaret Mary in Shelton and St. Mark in Stratford. He retired from full time ministry in 2003, but continued to assist at Bridgeport Hospital and St. Mark until his health made it impossible. Given his seafaring background, Father Barachini served as Chaplain to the Port of the City of Bridgeport for a number of years, beginning in 1992. Father Barachini’s body will be received at Saint Lawrence Church located at 505 Shelton Avenue in Shelton on Friday, May 27 at 4:00 p.m. and will lie in repose until 7:00 p.m. At 7:00 PM, Mass will be celebrated for the repose of Father Barachini’s soul. The principal celebrant will be Father Ciprian Bejan, pastor of St. Lawrence; the homilist will be Reverend Joseph Marcello. Bishop Caggiano will celebrate the Funeral Mass on Saturday May 28 at 10:00 a.m. The homilist will be Father Ciprian Bejan.

Father Nello A. Barachini passed away on Friday afternoon, May 20, 2022. He was 94 years of age. &#8220;Please pray for the repose of the soul of Father Barachini and for the consolation of his family,&#8221; said Bishop Frank J. Caggiano. Fr.... View Obituary & Service Information

The family of Reverend Nello A. Barachini created this Life Tributes page to make it easy to share your memories.

Father Nello A. Barachini passed away on Friday afternoon, May...

Send flowers to the Barachini family.