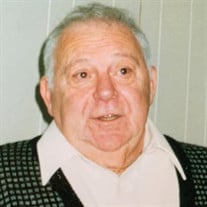 Nicholas D. DeSimone, 87, a resident of Schenectady, passed away peacefully on Tuesday, September 7, 2021 at Ellis Hospital. He was born on December 17, 1933 in Schenectady and was the son of the late Dominick and Carrie (August) DeSimone. Nicholas was a 1952 graduate of the former Draper High School. Following his graduation he went on to serve in the United States Air Force from 1953-1957. He was honorably discharged with the rank of Staff Sgt. Following his military service, he attended Siena College, graduating in 1960 with a degree in accounting. After graduation he accepted a position with the US Treasury Department; as an Internal Revenue Agent. He retired in 1989 following 29 years of dedicated service. Nick was a former member of the Rotterdam Knights of Columbus, Rotterdam Senior Citizens and a former long time member of the Menagerie Bowling League and Divot Golf League. He was a member of Our Lady of Mt. Carmel Church and NARFE (National Association of Retired Federal Employees). He is survived by his loving wife of 63 years, Ellen M. (Adamec) DeSimone; his three children, Michael (Donna) DeSimone of Clifton Park, Mark DeSimone and his significant, Jennifer Marshall of Queensbury, Michele (Paul) Marinaro of Binghamton; his seven grandchildren, Michael, Dana, Karly DeSimone, Kristen (Austin) Melleon, Brian DeSimone, Nicholas and Sara Marinaro and one great grandson, Benjamin Melleon. He is also survived by one brother, George (Lucille) DeSimone of Schenectady as well as several cousins, nieces, nephews, great nieces and great nephews. A Mass of Christian Burial will be celebrated 11:00 am on Friday, September 10, 2021 at Our Lady of Mount Carmel Church, 1255 Pleasant St, Schenectady, NY. Burial will follow with full military honors at Saint Cyril Cemetery, Schenectady. Calling hours are scheduled on Friday, September 10, 2021 from 8:30 - to 10:00 am at the DeMarco-Stone Funeral Home, 1605 Helderberg Ave, Schenectady, NY.

Nicholas D. DeSimone, 87, a resident of Schenectady, passed away peacefully on Tuesday, September 7, 2021 at Ellis Hospital. He was born on December 17, 1933 in Schenectady and was the son of the late Dominick and Carrie (August) DeSimone. Nicholas... View Obituary & Service Information

The family of Nicholas D. DeSimone created this Life Tributes page to make it easy to share your memories.

Nicholas D. DeSimone, 87, a resident of Schenectady, passed away...

Send flowers to the DeSimone family.