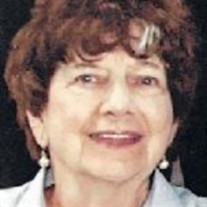 Patricia "Pat" Healy was born in Rutland, Vt. on January 29, 1930, to Fred and Susan Galarneau. She passed away on Sunday, March 27, 2022. Pat's family and friends were her joy. She touched many people with her special gifts. Patricia was an extraordinary pianist, playing at the Fort Orange Club in Albany, The Gideon Putnam in Saratoga Springs, and later for church services and wine and cheese receptions at the Avila Independent Retirement Community where she resided. She was a wonderful piano teacher, mentoring many students and friends in the fine points of making music. Pat was also an avid reader, lifelong learner, and loved to vacation on the New England coastline. Her strong faith was her foundation and she has left a beautiful legacy. Pat was employed for many years by the Bethlehem Central School District's library system where her love of learning and resource organization found a place in the work of her beloved students who sought her assistance. The family gives thanks and expresses deep appreciation for the tireless, committed support the staff at Teresian House Center for the Elderly provided to Pat, who engaged in loving community wherever she resided. Patricia is survived by her loving children, Stephen (Gail) Healy of Manlius, N.Y., Elizabeth Healy (Cliff Lyons) of Warwick, N.Y., John (Lorie) Healy of Amherst, Mass., and Matthew (Naomi) Healy of Brooklyn; her grandchildren, Jillian (Tim) Bennett, Chad Healy, Matthew (Kelsey) Denny, Joshua, Jedidiah and Kai Healy; her nieces, Charlene Galarneau (Don Tucker), Michelle (Darryl) Gregg, and Lisa (Mark) Belisle; her goddaughter, Susan Salvador (Chuck Koffenberger) and numerous other nieces and nephews. She was preceded in death by her husband of 42 years, John "Jack" Healy; her parents, Fred and Susan Galarneau; brother, Sam Galarneau; and sister-in-law, Debbie Thomas. Friends and relatives will be received on Sunday, April 3, from 2 - 4 p.m. at New Comer Cremations & Funerals, 343 New Karner Road, Colonie. A funeral Mass service will be held on Monday, April 4, at 10 a.m. in St. Ambrose Church, 347 Old Loudon Road, Latham. Interment will follow in the Calvary Cemetery, 481 Rte. 9W, Glenmont. Memorial donations may be made to Catholic Charities.

Patricia "Pat" Healy was born in Rutland, Vt. on January 29, 1930, to Fred and Susan Galarneau. She passed away on Sunday, March 27, 2022. Pat's family and friends were her joy. She touched many people with her special gifts. Patricia was an... View Obituary & Service Information

The family of Patricia G. Healy created this Life Tributes page to make it easy to share your memories.

Send flowers to the Healy family.