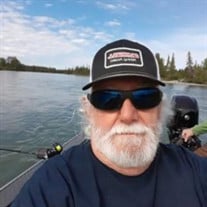 Paul L. “Butts” Gillam passed from this life, at his home. on May 14, 2022 at the age of 81. Born in Cohoes on January 8, 1941, Paul was the son of the late Francis E. “Frenchie” Gillam and Flora (McNab) Gillam Rootes. He resided in Green Island for much of his life and had also resided in Daytona, Florida in the 1960’s. He retired to his camp in Willsboro, NY following his career as a plumber-pipefitter at the former Ford Motor Company Plant in Green Island. Paul was a Trustee and Skilled Trade Representative for UAW Local 930. He was also the Assistant Stationary Engineer in the Guilderland Wadsworth Center. He was a member of the Friends of Bill W. Paul enjoyed fishing, traveling and the outdoors. He loved the times spent at the lodge in Alaska and in Cape Canaveral, Florida in the winter months. He was the husband of Mary Littlejohn Gillam; father of the late Bruce A. Gillam whose wife Terri survives of Willsboro, Paul Gillam, Jr. of Green Island, Mary Bryant of Green Island, Brent (Leigh) Gillam of Queensbury and Cheryl Gillam of Green Island; brother of Glenn (Karen) Gillam of Las Vegas, NV; grandfather of Bruce “Bud” (Maryann) Gillam, Jr., Bethany (Scott) Thurston, Richard Bryant, Anthony Bryant, Raema Gillam, Autumn Gillam, Caroline Gillam and Alison Gillam. He is also survived by his six great grandchildren, numerous nieces, nephews, grandnieces and grandnephews and many AA friends in Alaska, Florida and New York. A service will be held for Paul on Friday at 10 am in the Parker Bros. Memorial, 2013 Broadway, Watervliet following which he will be buried in St. Agnes Cemetery in Cohoes. Friends are invited to attend the service and may also visit with Paul’s family on Thursday from 4 until 7 pm at the funeral home.

The family of Paul L. Gillam created this Life Tributes page to make it easy to share your memories.

Paul L. “Butts” Gillam passed from this life, at his home. on...

Send flowers to the Gillam family.