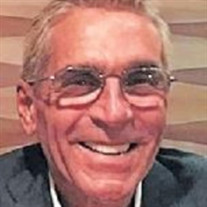 Paul J. McCullough. 61, passed away on May 20, 2022, in Jupiter, Fla. Paul was born in Albany, the self-proclaimed favorite child of the late Marcia and Edward McCullough. Paul began a highly successful career, spanning almost 40 years, in the restaurant industry starting as a busboy at the Fish Market in Atlanta, Ga., quickly moving up to work at the acclaimed Pano & Paul's. Over the years Paul worked in fine dining establishments in Hilton Head and Baltimore. He subsequently co-founded an extremely popular restaurant in Florida. He later moved back to the Capital Region bringing his expertise to McGuire's and Creo, then partnered in the creation of the highly-regarded 15 Church in Saratoga Springs, N.Y.. Paul's parents were able to witness his talent and success before their deaths in 2017 and 2018, and his entire family was so very proud of him. If you had the pleasure of dining in any one of his wonderful restaurants, you undoubtedly were the recipient of his wry jokes, warm hugs, unwavering attention to detail, and his uncanny ability to make you feel special. Paul was best known for his sharp fashion sense, his dry wit and most importantly his overwhelming generosity to his family and friends. He loved traveling, the beach, horse racing and most of all food. He not only enjoyed high end caviar, U/5 shrimp and wagyu beef but could be equally satisfied with an Orchard pizza or a Mike's Neba. Paul is survived by his four siblings: Colleen (William) Connelly, Daniel (Tricia Criscone), Michael and Christopher McCullough; along with his aunt Grace Warner; four nephews, a niece and several cousins. He is also survived by his former wife, partner and friend, Susan Diep. Paul was blessed with many loyal friends who stuck by him through good times and bad, most notably his long-time friends, Yasmine Perez, Susan Busco and Donald Reinhardt, as well as Jimmy Chmet, whose professional and personal relationship these last few years meant so much to Paul. A private ceremony for immediate family will be held at a later date. Those who wish to honor Paul's memory may make a donation to the Thoroughbred Aftercare Alliance in Saratoga Springs, NY at trfinc.org.

Paul J. McCullough. 61, passed away on May 20, 2022, in Jupiter, Fla. Paul was born in Albany, the self-proclaimed favorite child of the late Marcia and Edward McCullough. Paul began a highly successful career, spanning almost 40 years, in the... View Obituary & Service Information

The family of Paul J. McCullough created this Life Tributes page to make it easy to share your memories.

Send flowers to the McCullough family.