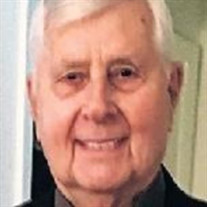 Paul V. Obermayer, Jr., age 85, from Palm Harbor, Florida, passed away from prostate cancer May 18, 2022, in the loving arms of wife of 64 years, Arleen. Deeply rooted in his Catholic faith, Paul passed peacefully. Paul was born in August 1936 in Staten Island, New York. He attended Columbia High School in East Greenbush, New York and enlisted in the United States Army. The focus of his professional career was with labor unions including the International Chemical Workers Union, the Public Employees Federation and the Civil Service Employees Association. His passion to help employees led him to success in negotiating better pay and working conditions. Paul was a Parishioner at Saint Luke's Catholic Church, member of the Elks Club and American Legion. He enjoyed outings to Tampa Downs and Saratoga Racetracks, gardening, fishing, bowling, cards, and writing. Paul had the gift of storytelling, something his family and friends will always remember. He published two books, The Agenda and Let Them Play. Paul was the beloved husband to Arleen; a loving father to daughters, Erica, Roberta and Andria; son-in-law, Bob Dickinson; and the best Papa to Melissa Lawson, Francessca Lawson and Katie and Kelly Hanley. Paul is preceded by his parents Paul and Marion; his brother, John and his wife Bernie; as well as a brother Robert (Bobby) Obermayer. Relatives and friends are invited to his visitation 5-7 p.m. Thursday, May 26, at William J. Rockefeller Funeral Home 165 Columbia Tpk Rensselaer. Mass of Christian Death and burial will be 9:30 a.m. Friday at the Church of Saint Mary Clinton Heights followed by the burial at Saint Agnes Catholic Cemetery. In lieu of flowers, the family requests donations to the Suncoast Hospice Foundation.

The family of Paul V. Obermayer created this Life Tributes page to make it easy to share your memories.

Send flowers to the Obermayer family.