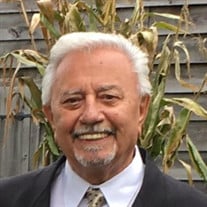 Peter Angelo, 86 of Voorheesville passed away peacefully on October 31, 2021. He was born in Brooklyn on November 9, 1934. Although he battled with ailing health for the last six months, his resilience and will to forge on for his family was inspirational. He is pre-deceased by the love of his life, Barbara. Their love story endured for 44 years and was one for the books. Perfectly imperfect, through the good times, the bad and all the in between, it was clear that no matter what, together they had it all. Peter is survived by his loving children, Lori and Keith Barnett, Darlene and Michael Reynolds, Michael and Jade Angelo and Tara and Michael Sciortino. The absolute loves of his life, who fondly referred to him as “Poppi,” were his grandchildren, John, Michael Joseph, Michael Peter, Nicholas, Peter, Julia, Brian, Gianna, Sophia and Vincent. Peter also leaves behind his cherished extended family and dear friends, whose friendships he treasured, some of which have lasted 80 years, a testament to the kind of devoted husband, father and friend he was. Peter’s smile lit up a room and people, young and old, just gravitated towards him. And, that laugh, especially when he laughed until, he cried, it was simply contagious, and you could not help but join in the belly-aching laughter. The ultimate kidder, that is who he was. Truth be told, if he was taking a “jab” at you or endearingly called you a “yammo,” you knew you had nothing to worry about because he liked you. You were blessed if you had an opportunity to sit with him and listen to his stories about the “good ole days.” He could spend hours passionately telling you about adventures with his buddies, people that he met, operating his club, running his luncheonette and memories of his childhood growing up in Brooklyn. The stories were vast in number and variety and left you waiting to hear more. Peter worked in the automobile sales industry for more than two decades. He truly enjoyed the people that he met; and he had a way of making a lasting impression on anyone who entered his life because even after purchasing a vehicle, his customers would return just to say “hello.” A dedicated, hard worker, that he most definitely was, yet he always managed to be “present” and make time for what was most important, his family. He was happiest spending time with his wife, children and grandchildren whether celebrating a holiday, attending an activity or sporting event for his grandchildren, enjoying a backyard barbecue, or treating them all to his favorite, Dairy Queen Blizzard. He was a loving, family man and everyone knew just how proud he was of his family because he was not shy about sharing his children’s accomplishments, his grandchildren’s successes, how lucky he was to have found his wife and how grateful he was for his family. Peter’s life is a testament to a life well lived and if you asked him, he would tell you that he was the richest man in the world because his wealth was measured not by any material object, but rather by the amount of love that filled his life. Peter’s family will receive family and friends on Friday, November 5, 2021 at Cannon Funeral Home, 2020 Central Ave., Colonie from 4-8 p.m. All those attending services are kindly invited to wear a facial covering. The Mass of Christian Burial will be held on Saturday, November 6, 2021 at 10:00 am at Christ the King Church, 20 Sumpter Avenue, Guilderland. The Mass will be live streamed on the parish website, www.ctkparishny.org. Interment will be in the Most Holy Redeemer Cemetery.

Peter Angelo, 86 of Voorheesville passed away peacefully on October 31, 2021. He was born in Brooklyn on November 9, 1934. Although he battled with ailing health for the last six months, his resilience and will to forge on for his family... View Obituary & Service Information

The family of Peter F. Angelo created this Life Tributes page to make it easy to share your memories.

Peter Angelo, 86 of Voorheesville passed away peacefully on October...

Send flowers to the Angelo family.