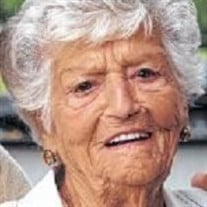 Phyllis Devine Brennan was born in Ridgewood, N.J. to B. Frank and Mary Jo (Tilli) Albanese on November 17, 1922. She entered eternal life on Sunday, December 5, 2021. Phyllis and her sister, Pat (Aubuchon) lived with their parents in Rochester, Buffalo, Bronxville and Albany. Phyllis attended Stoneleigh Junior College in Rye Beach, N.H. She learned to play piano at a young age and enjoyed a very brief career as a model. After college, Phyllis returned to Albany where she worked for the telephone company. She met her future husband, Eugene P. Devine Sr. at the wedding of her friend, Peggy, and his brother, John. Phyllis and Gene were married for 26 years, until his death in October 1974. They shared a wonderful life while traveling, meeting Presidents Kennedy and Johnson and two Popes or simply enjoying a game of golf or bridge or a meal or cocktails. In a fortunate turn of events, Phyllis reconnected with her college boyfriend, John Kent Brennan, in 1980, and they married shortly thereafter. Phyllis and Kent loved each other's children as their own. They split their time between Lighthouse Point, Fla. and Albany, while sailing the Florida coast, often to the islands, and golfing and socializing with their expanded family and many friends both new and old. It was a rare second opportunity at happiness. They made the most of it until Kent's death in 1994. Thereafter, Phyllis returned permanently to Albany where she continued to spend many happy hours with family and friends at Wolfert's Roost Country Club golfing and playing bridge well into her 90s. Phyllis began volunteering during World War II as a Gray Lady and a member of the Intercept Command. She later served with the LaSalle School for Boys, Brady Hospital Auxiliary, St. Peter's Hospital Auxiliary, Albany Institute of History and Art, the Daughters of Mary, the Catholic Women's Service League, and with numerous golf leagues here and in Florida. Phyllis was honored to be a Lady of the Holy Sepulcher. Phyllis is survived by her children, The Hon. Eugene P. Devine (and Debra) and Mary P. Devine (and Marty Barrington); her grandchildren, Kim Devane (Matt and daughters, Kendall and Rory), Adrianne Devine, Madeline Devine, Matt Barrington (Ashley and daughter, Virginia), and Kathleen B. McGregor (Cody, son Lee, and daughter, Evans); and by Kent's children, Kate McCarthy (John), Karen Szuks (Joe), Mary Sue Burnsed (Louis), Nellie Hensley (Paul), and Jamie Brennan (Jody); and Kent's grandchildren, Ryan, Kevin and Michael McCarthy, Alexandra Szuks Cunningham, Mary Kate Jones, Nicholas Burnsed, and Aren Milley Brennan and their 11 children. She also leaves behind her much-loved nieces and nephews. In addition to Gene and Kent, Phyllis was predeceased by her sister, Patricia Aubuchon; her granddaughter, Tracy Devine; Kent's son, Kent, daughter, Bridget and grandson, Brennan Hale. Phyllis loved well and was well loved. She will be sorely missed by her family and many friends. Funeral services will be private, but a celebration of her life will be held at a future date. Please consider a donation in Phyllis' memory to the Bernard & Millie Duker Children's Hospital at Albany Med, c/o Albany Medical Center Foundation, MC 119, 43 New Scotland Ave., Albany, NY, 12208.

Phyllis Devine Brennan was born in Ridgewood, N.J. to B. Frank and Mary Jo (Tilli) Albanese on November 17, 1922. She entered eternal life on Sunday, December 5, 2021. Phyllis and her sister, Pat (Aubuchon) lived with their parents in Rochester,... View Obituary & Service Information

The family of Phyllis D. Brennan created this Life Tributes page to make it easy to share your memories.

Phyllis Devine Brennan was born in Ridgewood, N.J. to B. Frank...

Send flowers to the Brennan family.