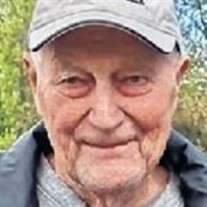 Ralph Thomas LaBarge, age 91, passed away peacefully on September 25, 2021, at St. Peter's Hospital in Albany, after a short illness. Ralph was born in Pittsfield, Mass. and was a long-time resident of Delmar. He is survived by his loving wife of sixty-five years, Eleanor from Glenmont; his children, Eileen LaBarge of Delmar, Pierre and Amy LaBarge of North Bend, Wash., Andrew and Amy LaBarge of Johnsonville, and Matt and Felicia LaBarge of Paducah, Ky.; his sister Dianne Fairbanks of Traverse City, Mich.; nine grandchildren, and three great-grandchildren. He was preceded in death by his parents, Henry and Margaret LaBarge; his siblings, Paul LaBarge and Joanne Mineau; and his precious daughter, Theresa Flansburg, and son-in-law Steve Flansburg. Ralph survived polio as a teen and after graduating from Pittsfield High, he served in the U.S. Navy as a Seabee in Nova Scotia, Canada. Ralph worked for many years as a carpenter and foreman for Van Woert and Sons, of Delmar, who developed Kenholm and other neighborhood of Bethlehem. As a devout and lifelong parishioner of St. Thomas the Apostle Church, he helped steward Boy Scout Troop 71 for nearly 15 years. He was awarded the Silver Beaver, scouting's highest volunteer honor in service to youth leadership and the Scouting community at large. After retirement, Ralph and Eleanor traveled many times around the U.S., including Alaska and Canada, in their R.V. forming countless friendships along the way. For years they shared time spending winters in Wesely Chapel, Fla., and summers in Alburg, Vt. Ralph never shied from sharing his master builder skills with his community and was always there to lend a hand or a tool to those in need. Ralph gave from his hands and his heart to all who crossed his path. His funeral Mass will be celebrated on Wednesday, September 29, at 9:30 a.m. in St. Thomas the Apostle Church, 35 Adams Place, Delmar. Masks are required. A procession to the Calvary Cemetery will immediately follow. Ralph's favorite food, ice cream, will be served. For those who wish, memorial contributions may be made to German Shepherd Rescue of NY, Inc, P.O. Box 242, Delmar, NY, 12054 or at GSRNY.org.

Ralph Thomas LaBarge, age 91, passed away peacefully on September 25, 2021, at St. Peter's Hospital in Albany, after a short illness. Ralph was born in Pittsfield, Mass. and was a long-time resident of Delmar. He is survived by his loving wife... View Obituary & Service Information

The family of Ralph T. LaBarge created this Life Tributes page to make it easy to share your memories.

Send flowers to the LaBarge family.