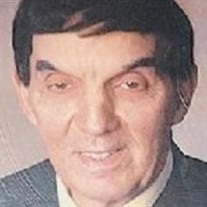 Richard R. LaMountain, lovingly known as "The King," 89, passed away surrounded by family and friends at Rosewood Nursing & Rehab in Rensselaer on October 9, 2021, after a brief illness. He was born on July 6, 1932, in Albany. Rick was renowned for his driving ability and worked for Holmes Transportation for 37 years as a member of Teamsters Local 294, driving tractor trailers out of the Capital Region. He retired from his truck driving role in 1989 before becoming a partner and driver for a limousine company for many years. People would often request Rick by name, and he was incredibly popular with customers for his big personality and warm nature. The King had a passion for many things in life, most importantly his Catholic faith and his devoted service to All Saints Catholic Church in Guilderland. For more than 30 years, Rick lovingly assisted the parish in a variety of ways as a eucharistic minister. Rick was well-known for his love of automobiles and fondness for always dressing impeccably. The King would often be seen driving one of his cars throughout the Capital Region looking dapper and with a giant stuffed teddy bear in the passenger seat. He had a passion for physical fitness and working out in the gym, where he made many friends over the years. Rick also loved to travel and took dozens of trips literally around the world, including such destinations as Australia, Hawaii, Portugal and many other locations. Rick is survived by his children, Rick, Linda, Mike and Gary; grandchildren, and close family friends, Adam Doling, Debbie Doling, Betsy Forsland and Peter Solimando. He was predeceased by close family friends, Steve Doling and John Molitor. His family and friends would like to extend their heartfelt thanks and appreciation to the staff at Rosewood Nursing & Rehab for their loving care and attention to him these past several months. He will be greatly missed by all who knew him. A Mass of Christian Burial will be celebrated on Thursday, October 14, at 9 a.m. in All Saints Catholic Church, 16 Homestead Street, Guilderland. Masks are required for all attending the service. Rick's family and friends are requesting that anyone wishing to remember him in a special way make a memorial contribution to Meals on Wheels through LifePath (formerly known as Senior Services of Albany) at lifepathny.org/your-impact. The dedicated staff at LifePath prepare more than 600 meals each day at their kitchen in downtown Albany, and Rick was grateful to be part of the Meals on Wheels program this past year.

Richard R. LaMountain, lovingly known as "The King," 89, passed away surrounded by family and friends at Rosewood Nursing & Rehab in Rensselaer on October 9, 2021, after a brief illness. He was born on July 6, 1932, in Albany. Rick was renowned... View Obituary & Service Information

The family of Richard R. LaMountain created this Life Tributes page to make it easy to share your memories.

Send flowers to the LaMountain family.