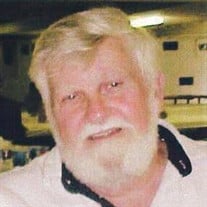 Robert Charles “Bob” Clayton Sr., 90, a longtime resident of Route 7, died peacefully, Thursday, April 28, 2022 at his son’s Saratoga Springs residence, surrounded by his family, following a short illness. Born in Waterford, April 11, 1932, Bob was the son of the late Robert and Edna (Eldridge) Clayton and for over 50 years the husband and best friend of the late Kathleen (Bisnett) Clayton who predeceased him April 2, 2015. Before graduating high school Bob enlisted in the United States Navy. After basic training he was stationed in Japan and served aboard several vessels during his service time in the Korean Conflict. In addition to serving his country, he earned a General Equivalency Diploma through the Navy prior to his honorable discharge in 1952. In the early 1950’s he married the love of his life, Kathleen, and together the couple established their home in Boyntonville and began raising their family. In 1953, Bob took a job interview with the former NY Telephone Company. He was employed as a lineman and assisted many of his neighbors as a pole climber, helping to provide telephone service thoughout much of eastern New York. After 38 years of working in all types of weather, including rain, snow and power outages, Bob retired in 1991. He was a faithful communicant of the former St. George Roman Catholic Church and currently Our Lady of Victory Church in Sycaway. In his quiet time he enjoyed gardening, fishing, hunting and camping as a younger man, with Kathleen and the kids at Roger’s Rock on Lake George. Bob was very proud of his children and grandchildren. Among his most favorite recent pastimes was to spend time visiting with them and their friends over good food or hot cup of coffee. Bob is survived by his six children and their spouses, Robert C. Clayton Jr. and June Clayton of Pittstown, Mark and Linda Clayton of Boyntonville, Cindy and Ken Mayes of New Castle, Maine, Wendy Clayton of Boyntonville, Matthew Clayton of Boyntonville, and David and Jennifer Clayton of Saratoga Springs, fourteen grandchildren, twenty great-grandchildren and several nieces nephews and cousins. In addition to his parents and wife, Kathleen, he was predeceased by his brothers and sisters. Funeral services for Bob will begin on Tuesday, May 3, 2022 at 9:15 a.m. at the Howard B. Tate & Son Funeral Home Inc., 2237 NY Route 7, located in Raymertown followed by a Mass of Christian Resurrection for Bob to be celebrated at 10:30 a.m. at Our Lady of Victory Church in Sycaway. Burial will follow in St. Mary’s Cemetery in Troy. Relatives and friends are invited to call at the funeral home on Monday, May 2, 2022, from 4:00 – 7:00 p.m.

The family of Robert C. Clayton created this Life Tributes page to make it easy to share your memories.

Send flowers to the Clayton family.