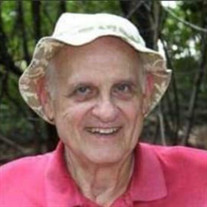 Robert D. Kranick, 82, passed away peacefully on August 10, 2021, surrounded by his family. Born on May 5, 1939 to the late Stanislaus and Henrietta Kranick, Bob was a graduate of Nott Terrace High School, class of 1957. He proudly served in the U.S. Army until 1961, then began his career at Greyhound Lines where he worked for 30 years, starting as ticket agent, and retiring as the district manager. During this time Bob was most proud of leading his team to resolve the transportation dilemma, which then allowed the 1980 Olympics to continue in Lake Placid. Bob was presently employed at the NYS Department of Education as a secretary, where he met his best friend Justyn, leaving him with the message "Look after your babies. " Bob was a devoted husband to his wife of 52 years, Dawn Kranick, who predeceased him in 2017. They both enjoyed spending their final years living on the lake with their beloved canine companions Charlie and Missy. Together Bob and Dawn loved making cherished memories with their children, grandchildren, and great grandchildren, who meant the world to them both, which include many trips to the theater, camping, and deep sea fishing. Even in his final years, Bob was never one to slow down, still doing all of the things he loved, including bowling, betting the horses, watching his favorite team, and most importantly teaching his grandchildren and great grandchildren as much as he could. Along with his wife, Dawn, Bob is also predeceased by a son, William Robert Kranick, and his brothers, George and Donald. Bob is survived by his children, Rita Pellegrino (Chris), Elizabeth Greenwood (Chuck), Stanley Kranick (Kelly), Matthew Kranick, Rebecca Williams, Kyle Kranick; 26 grandchildren and 17 great grandchildren with the 18th due next month, who all dearly miss their Poppa. Calling hours will be held on Wednesday, August 18, 2021 from 5-7pm at New Comer Cremations & Funerals, 343 New Karner Rd., Albany, NY 12205. A funeral service will be held on Thursday, August 19, 2021 at 10am at New Comer Cremations & Funerals. Interment will follow at Most Holy Redeemer Cemetery. Memorial contributions may be made to The Saratoga County Animal Shelter in honor of his senior pups Charlie and Missy at 6010 County Farm Road, Ballston Spa, NY 12020.

Robert D. Kranick, 82, passed away peacefully on August 10, 2021, surrounded by his family. Born on May 5, 1939 to the late Stanislaus and Henrietta Kranick, Bob was a graduate of Nott Terrace High School, class of 1957. He proudly served in... View Obituary & Service Information

The family of Robert Kranick created this Life Tributes page to make it easy to share your memories.

Send flowers to the Kranick family.