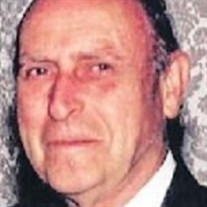 Roger Wilcox Yeomans died at his home on Thursday, May 26, 2022, surrounded by his family. Roger was born on January 20, 1931, in Utica, the fourth and youngest son of Jackson Earl Yeomans and Ana Williams Yeomans. Upon his mother's untimely... View Obituary & Service Information

The family of Roger W. Yeomans created this Life Tributes page to make it easy to share your memories.

Send flowers to the Yeomans family.