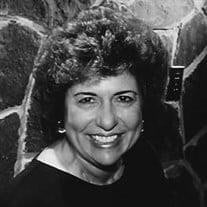 Rose Marie Stevens was a caring wife, mother, grandmother, sister, aunt and friend. She left this world on September 11, 2021 at age 81. She was born to Stephen and Mildred Barbato on September 21, 1939. After graduating from high school, Rose Marie attended Secretarial School which led to a position at Matthew Bender. Through a mutual friend she met her husband-to-be, Edward Stevens. They fell in love, and married in June of 1971. Edward, was an Albany Police Officer killed in the line of duty 5 months later. Rose Marie was pregnant at the time, and gave birth to Edward Charles Stevens, Jr. in May of 1972. Rose Marie dedicated the rest of her life to being the best mother, father, sister, aunt, grandmother and friend that she could. Family was everything to her, and if you know her, you already know that. She had endless love for her son, Edward, his wife Laura, and her two grandsons, Sean and Matthew. Rose Marie is also survived by her sister, and best friend, Ann Lucile. Ann has three children who affectionately called her Aunt Ro, but she was always so much more than an aunt. She also made sure to nurture the relationships of her husband’s extended family. She made sure she was always there for all of her nieces and nephews, and that they never forgot about their Uncle Ed. Those that know Rose Marie, know she endured many hardships throughout her life. She never let that get in the way of the love she had to share. Her strength and memory will live on through those she touched while she was here. Funeral services will be held Wednesday morning 10:30 at St. Vincent de Paul Church. Relatives and friends are invited and may also call at the funeral home Tuesday from 4 to 6 pm. Interment St. Agnes Cemetery.

Rose Marie Stevens was a caring wife, mother, grandmother, sister, aunt and friend. She left this world on September 11, 2021 at age 81. She was born to Stephen and Mildred Barbato on September 21, 1939. After graduating from high school, Rose... View Obituary & Service Information

The family of Rose Marie Stevens created this Life Tributes page to make it easy to share your memories.

Send flowers to the Stevens family.