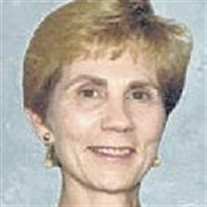 Ruth A. Constantine (Cryan), whose life was centered on family, passed away on Friday, September 3, 2021 after a long illness. She was 81. An exceptional wife and mother, Ruth possessed a strong sense of duty for her family. In 1960, she and Thomas A. Constantine wed. When Tom began a career in law enforcement as an Erie County Sheriff Deputy, thereafter taking a position as a New York State Trooper, rising through the ranks to become superintendent, and subsequently taking on positions of the administrator of the Drug Enforcement Administration in Washington, D.C., and eventually was appointed by the U.S. and British Governments to serve as Oversight Commissioner for policing reform in Northern Ireland, Ruth was a supportive partner. She moved with him around the country and was frequently at his side when he attended professional functions. They were married for 55 years until his death in 2015. The couple raised six children together, and Ruth enjoyed being the central figure in each of their lives. "To Mom, family was everything," said her children, "she was more than happy to have her identity defined by her devotion to dad and us. For her, that was more important than having a career. She put all of us before herself." Ruth was the proud mother of six children, Patty (Joe) Gatta, Tom (Demantra) Constantine, Kevin Constantine, Lisa (Jeff) Reale, Kathy Constantine, Laura (Jon) Jezyk. She is survived by fifteen grandchildren, Christine (Gatta) Eats, Joseph Gatta, Matthew Gatta, Anthony Gatta, Nicholas Gatta, Shane Constantine, Molly Constantine, Justice Constantine, Connor Reale, Cory Reale, Sophia Constantine, Joseph Greene, Thomas Constantine, Liam Jezyk and Ronan Jezyk; ten great-grandchildren, Adelina, Peyton, Owen, Olivia, Abbott, Camille, Alula, Sydney, Eliana and Aurelius; and her siblings, Richard Cryan, Pat St. Angelo, Frank Cryan, Margaret Handford, David Cryan and Mary Millett. Ruth was preceded in death by her parents, Robert T. Cryan and Ellen Lancaster Cryan; and her brothers, Robert Cryan and Michael Cryan. Her late husband, Tom, has a Hallmark card with him from Salamack's on Upper Union Street waiting for her that reads "At long last, we have finally been reunited. How truly wonderful it is to see you, a gentle reminder just how favored I am by God. He blessed me eternally when he put you in my path. You are the kindest, most compassionate and beautiful woman I have ever known. Your bravery throughout our years together as you stood by my side was inspirational and admired not only by me but by our wonderful children. Your unconditional love for me every day we had together was one I cherished until my last breath. God rewards those who are faithful to him. Ruth, you were my life's reward, my one and only true love and now, that you have returned to me, I promise to do the same for you as we spend it here together in eternity. 'Walk on, walk on, with hope in your heart and you'll never walk alone again.'" Relatives and friends are invited to attend the Mass of Christian Burial which will be celebrated on Friday, September 10, at 11 a.m. in St. John the Evangelist Church, 810 Union St., Schenectady. There will be no calling hours. Burial will be in the Most Holy Redeemer Cemetery, Niskayuna.

Ruth A. Constantine (Cryan), whose life was centered on family, passed away on Friday, September 3, 2021 after a long illness. She was 81. An exceptional wife and mother, Ruth possessed a strong sense of duty for her family. In 1960, she and... View Obituary & Service Information

The family of Ruth A. Constantine created this Life Tributes page to make it easy to share your memories.

Ruth A. Constantine (Cryan), whose life was centered on family,...

Send flowers to the Constantine family.