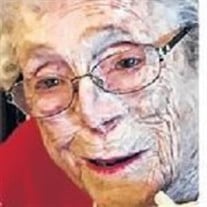 Ruth C. Hans, 103, peacefully passed on March 24, 2022, at Albany Medical Center after a brief illness. Born on October 4, 1918, in Albany, she was the daughter of the late John and Elizabeth (McCardle) Bleichert. Ruth was retired from The Hartford Insurance Company where she was a supervisor for many years. She was a 59 year member of the West Albany Volunteer Fire Company Ladies Auxiliary and was awarded Sister of the Year in 2018. Known as Gram to many, she loved life and spending time with her family and friends. She enjoyed traveling, especially with her late niece, MaryAnn Tozzi and her husband Tony. She spent many summers at her camp in Saranac Lake. Her camp bedrooms would be full and any number of grandchildren could be found sleeping on her couches, cots, or wherever space could be found. She would not have wanted it any other way. Many happy hours were spent with her loved ones in front of camp fires, playing cards or just sitting and chatting while overlooking the lake. In recent years Gram spent many happy hours with family camping on The Great Sacandaga Lake. While it was painful to some of her grandchildren, Gram was an avid fan of the New York Yankees and would never allow a bad word to be said about "her guys." Baseball was a passion she picked up when she was in her 80's but her amazing longevity allowed her to be fan for over 20 years. She never missed an opportunity to watch their games on TV. The family was blessed that she was on this earth for 103 quality years. She would never allow an illness to keep her down long. Before you knew it she would be back on her feet. Right up until her last days she was able to recount events and experiences throughout her life with clarity and great detail. Ruth passed on the 15th anniversary of her husband's death. Ruth and Victor Hans were married on June 21, 1939, and celebrated 68 years together. She was also predeceased in death by her two daughters, Claire E. Graves (Carl - deceased) and Ruth L. Graves (Marvin); a grandson, Ted Graves (Sherry); her brothers, George and John Bleichert; and sisters, Catherine "Betty" Courcelle and Marie Fronk. Ruth is survived by her grandchildren, Victor Graves (Deborah), Cynthia Pedalino (Michael), Kenneth Graves (Sandra), Darlene Foley (Shawn), and Dennis Graves (Michelle). Ruth is also survived by her great-grandchildren, Allyson Pingelski (Ian), Mathew Graves (Melissa), Nicholas Pedalino, Colin Graves, Caitlin Graves, Amanda Graves, Morgan Graves, Kendall Graves, Steven Foley, Abigail Graves, Emma Graves, Eric Graves, and Evan Graves; her great-great-grandchildren, Natalie, Brody and Brooklyn Pingelski, and Aiden Graves. The family would like to thank the staff at Brookdale Senior Living of Niskayuna for helping to ensure she was able to live an independent life right up until the end. In addition they are grateful to the Albany Medical Center Unit 5D staff for their expert care and compassion shown to Ruth in her final days. Calling hours will be held Tuesday, March 29, from 4 to 7 p.m. at Cannon Funeral Home, 2020 Central Ave., Colonie. A Mass of Christian Burial will be celebrated at 10 a.m. on Wednesday, March 30, in Christ Our Light Church, 1 Maria Drive, Loudonville.

Ruth C. Hans, 103, peacefully passed on March 24, 2022, at Albany Medical Center after a brief illness. Born on October 4, 1918, in Albany, she was the daughter of the late John and Elizabeth (McCardle) Bleichert. Ruth was retired from The Hartford... View Obituary & Service Information

The family of Ruth C. Hans created this Life Tributes page to make it easy to share your memories.

Send flowers to the Hans family.