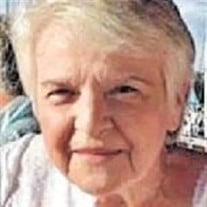 Sandra P. Tarte, 79, formerly of Clifton Park and Cohoes, entered peacefully into eternal life surrounded by her loving family on March 22, 2022, after a long battle with cancer. Born in Troy and raised in Cohoes, Sandy was the daughter of the late Charles and Anne Tremblay Shepard. She graduated from Keveny Memorial Academy and The Samaritan Hospital School of Nursing where she earned her degree as a registered nurse. She went on to work for many years as an R.N. supervisor in the Labor and Delivery Unit of Saratoga Hospital until retiring in 2009. Because of her nurturing ways she truly enjoyed helping to bring new life into the world. If there was a baby around, you can be sure that Sandy was holding it. Following her retirement, she moved to Florida where she has resided until the time of her passing. Sandy loved being outside and walking every day, taking trips to the casino with her girlfriends, dining out and music. She also always enjoyed her family trips to Cape Cod and Montreal. Of course, her greatest joy was time spent with her children and grandchildren. Family was the center of her world, and she cherished each moment spent together. Sandy was the loving wife of 44 years of Roger J. Tarte Sr., who passed in 2008; the beloved mother of Roger J. Tarte Jr. (Michelle) of Bradenton, Fla., Cynthia A. Sieber (late Herbert) of Clifton Park, Kristin M. Miller (Christopher) of Palmetto, Fla., Charles R. Tarte of Scotia, and Gregory M. Tarte (Antonietta) of Rexford; the grandmother of Nicholas, Maxwell, Elise, Ryan, Danielle, Gabrielle, Megan, Amanda and Stefanie; and the beloved sister of the late F. Milton Shepard (Mary). She is also survived by her sister in-law, Carol Haggard (late David); several nephews, godchildren and her lifelong friend, JoAnne Conners. Funeral services will be held on Saturday, April 2, at 9:30 a.m. from the Fitzgerald Funeral Home, 105 Vliet Blvd., Cohoes and at 10 a.m. in the Church of the Holy Trinity, Cohoes. Relatives and friends may visit at the funeral home on Friday, April 1, from 4-6 p.m. Those wishing to remember Sandy in a special way may make contributions to the National Breast Cancer Foundation.

Sandra P. Tarte, 79, formerly of Clifton Park and Cohoes, entered peacefully into eternal life surrounded by her loving family on March 22, 2022, after a long battle with cancer. Born in Troy and raised in Cohoes, Sandy was the daughter of the... View Obituary & Service Information

The family of Sandra P. Tarte created this Life Tributes page to make it easy to share your memories.

Send flowers to the Tarte family.