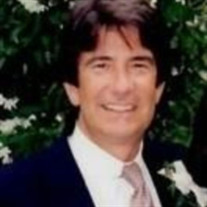 Stanley James Chakales of Hilton Head Island, South Carolina, age 75, passed away peacefully on October 23, 2021. His death was the result of complications following his two year battle with esophageal cancer. Stan is preceded in death by his loving wife, Barbara Batey Chakales. Stanley was born in Hopewell, Virginia on November 15th, 1945 to parents James and Estelle Vlahos Chakales. Tragically, Estelle died from a coronary embolism just hours after Stan's birth. Soon thereafter, Stan went to live with his aunt and uncle, the late Stephen and Eugenia Vlahos Michaelson and was raised in Ravena, New York, and later in Carmel, California. Stan is also preceded in death by his sister, Georgette Beaver. Left to cherish his memories are his daughter, Allyce Estelle Tasanasanta (Sam), and grandchildren Julia and David Tasanasanta of Atlanta, Georgia. Stanley is also survived by his sisters, Estelle (Kathy) Bockis (Joseph), Beverly Patton (Joseph), Nina Palermo (Michael), nieces Sarah Beaver, Sheri Ciccone (Edward), Althea Shaver (Blaine), Erin Gough, nephew Jason Gough and a multitude of other loving relatives and close friends. After graduating in 1963 from Carmel High School, in Carmel, CA, Stan attended Ithaca College where he was awarded a full scholarship to play baseball as a pitcher on their then, Division 1 baseball team. In his rookie year, Stan helped his team clinch a spot in their divisional World Series. In addition, Stan served his country for six years as part of the U.S. Marine Corps Reserves. Upon leaving college, Stanley embarked on a long successful career in sales management with AM International and Mergenthaler Linotype. He held a variety of sales management positions before buying a successful restaurant and catering business in Atlanta. Following his many business pursuits, Stan enjoyed living in Southington, Connecticut; Boston, Massachusetts; Atlanta, Georgia and finally Hilton Head Island, South Carolina. A talented left handed athlete, Stanley found his true passion in playing tennis. Although Stan didn't start playing competitive tennis until after college, he successfully competed on multiple high level ALTA and USTA teams every season up until the year of his death. On the court, Stan was highly competitive with an unmatched balance of mental toughness and tenacity, but it was the many amazingly supportive friends, who he made through tennis, which carried him through the toughest of times. Stanley married Barbara Batey, on August 19th,1992 in Carmel, California. Together, they shared 19 adventurous years of married life. Stan was an avid reader and political enthusiast. He and Barbara enjoyed traveling, playing tennis, skiing, preparing gourmet meals, visiting with their many friends and family, but most of all they loved their dog Mason and all their cats. Full of compassion, Stan and Barbara never tired of helping stray animals in any way they could. Stanley will be remembered for his keen insightfulness and love of life. There was never a time he was without a thoughtful suggestion or word of wisdom. Stanley may be gone from our sight, but never from our hearts. The family will be forever humbled and wishes to make a special acknowledgement to all of his friends in Hilton Head Island and Atlanta, who were so generous and gave him the best gift life has to offer - their friendship. A funeral Mass will be celebrated on Monday, December 20, 2021 at 1:00 p.m. at Church of St. Patrick in Ravena, NY. Interment will follow the Mass in St. Patrick's Cemetery, Ravena. Condolences may be sent in care of Allyce Tasanasanta at 340 Highlands Trace, Roswell, GA 30075. In lieu of flowers, please make donations in memory of Stanley Chakales to Our Lady of Perpetual Help Home, 760 Pollard Blvd SW, Atlanta, GA 30315 or Hilton Head Humane Association, 10 Humane Way, Hilton Head Island, SC 29926.

Stanley James Chakales of Hilton Head Island, South Carolina, age 75, passed away peacefully on October 23, 2021. His death was the result of complications following his two year battle with esophageal cancer. Stan is preceded in death by his... View Obituary & Service Information

The family of Stanley James Chakales created this Life Tributes page to make it easy to share your memories.

Send flowers to the Chakales family.