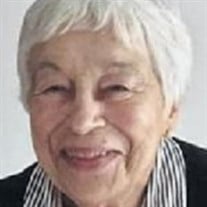 Stella Wawruch DeWitt passed away peacefully on August 15, 2021, after 95 years on this earth. She was born in Niagara Falls, N.Y. to Lucy (Pacia) and Stanley Wawruch, and later, was also raised by her stepmother, Josephine (Wozniak) Wawruch. She grew up during the Great Depression, her family growing much of their own food and taking in the less fortunate when they needed temporary shelter. At the age of 16, Stella was managing a doctor's office, and after graduating from Niagara Falls High School, she worked as a secretary at a local radio station and then an architectural firm. While employed at Union Carbide, she met the love of her life, William DeWitt; they were married for 57 years until Bill passed in 2016, and they had two children, William David DeWitt Jr. (Robert Pulster), and Karen DeWitt (Jeffrey Carlson). Their lives took them from Western New York to Portland, Maine, to finally settle in Glenville, where Stella and Bill both worked at General Electric. Stella was known for her ingenious ability to make a simple recipe taste like she'd spent hours on it. Her vegetable garden and later, vibrant geraniums, were the admiration of the neighborhood. She was passionate about our nation's democracy, and her kindness and generosity influenced many lives. She will be greatly missed. Stella was predeceased by her sister, Josephine Kasprzyk; and brother-in-law, Chester Kasprzyk. She leaves behind nieces and nephews, Christine Ciesla (John), Carol Harrison (Donald), Chester Kasprzyk (Virginia), Patricia Moriarity and Sandra Wozniak; as well as several grandnieces and nephews; and family friend, Mary Roche. She also received support and friendship from Maryanne Malecki, Sandy Rohrmeier, Claire Houlihan, and Rose Cuscino. A funeral service will be held on Saturday, August 21, at 12 p.m. in the Glenville Funeral Home, 9 Glenridge Rd., Glenville, officiated by Reverend Jerry Gingras. Interment will follow in Kateri Meadows in The Most Holy Redeemer Cemetery, Niskayuna. Contributions may be made to a local food pantry.

Stella Wawruch DeWitt passed away peacefully on August 15, 2021, after 95 years on this earth. She was born in Niagara Falls, N.Y. to Lucy (Pacia) and Stanley Wawruch, and later, was also raised by her stepmother, Josephine (Wozniak) Wawruch.... View Obituary & Service Information

The family of Stella DeWitt created this Life Tributes page to make it easy to share your memories.

Send flowers to the DeWitt family.