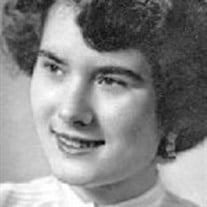 Stella A. O'Brien was together with family when she passed away on Saturday, February 27, 2021, at the age of 85. She is now in Heaven reunited with her devoted husband James. Stella was the daughter of Josef and Gisela Schlener, born in Allentown, Pa., and raised in Poppendorf, Austria. Her life was interesting from the very beginning. After surviving WWII as a little girl, she travelled daily from the Russian Zone to a British Zone where she attended school and was able to learn English. She was very active in theater, music, and took private typing classes. In 1951 visitors from the United States came to her house to bring a ring as a gift from her Godfather. They invited her to come to America since she was an American citizen. This became her miracle and with her parent's permission she moved to the country that she came to love. Stella's friendly, outgoing personality opened many doors for her in America. She had many wonderful and interesting employers, and worked for McGraw and Hill Publishing Company. She was a nanny and managed the household of a Naval Captain as well as a vascular surgeon. At age 19 she traveled to Europe to visit her parents. There she met the love of her life on the famous Orient Express train, a handsome gentleman in the Air Force, Dr. James P. O'Brien. After his discharge they got married and were blessed with 62 years of very happy marriage, as well as two wonderful children. Stella enjoyed travel to many places, including Italy, Spain, many other European countries, and several Island nations. She became a nurse and worked at Albany Medical Center Hospital while her beloved husband James went to medical school and became a neurosurgeon. Retiring when she became a mother, Stella spent many happy years with her family skiing, traveling, and enjoying life. She was a caring, loving supporting wife and mother. Wherever she went, Stella met many interesting people and had fascinating experiences. She made lifelong friends simply by sitting next to them on an airplane, was honored by an airline for being its 5000th passenger, leading to a surprise visit from Austrian politicians, the president of an Austrian-American organization, and a large brass band. She even was a winner on the television game show "I Guess." hosted by Bill Cullen. Her kindness, generosity, honesty, love of life and deep Catholic beliefs combined to bring her much love and joy with her family, relatives, and friends. She was deeply grateful for those blessings. Stella is survived by her dearly beloved daughter, Heather O'Brien (Jim Smith); her step-granddaughters, Rachel and Julianna Smith; and her step-great-grandson Grayson. She is also survived by her loving son Brendan O'Brien; and her granddaughters, Cassidy and Ella O'Brien, as well as many nieces and nephews, and cousins in Canada and Austria. Countless others saw her as a mother figure, including many who didn't enjoy the loving family bonds she had, as she made sure to impart her love on those souls throughout her life. In addition to her parents and husband, Stella was also predeceased by her brothers, Julius and Josef Schlener. Relatives and friends are invited to call on Friday, March 5, from 4 to 7 p.m. at Applebee Funeral Home, 403 Kenwood Ave., Delmar. A funeral Mass will be celebrated 10 a.m. Saturday, March 6, in St. Thomas the Apostle Church, 35 Adams Pl., Delmar. Burial will be in St. Agnes Cemetery, Menands at a later date. In lieu of flowers, contributions may be made to Community Hospice, 310 So. Manning Blvd., Albany, NY 12208.

Stella A. O'Brien was together with family when she passed away on Saturday, February 27, 2021, at the age of 85. She is now in Heaven reunited with her devoted husband James. Stella was the daughter of Josef and Gisela Schlener, born in Allentown,... View Obituary & Service Information

The family of Stella O'Brien created this Life Tributes page to make it easy to share your memories.

Stella A. O&#39;Brien was together with family when she passed away...