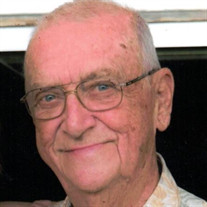 Steven A. Popolizio, 90, entered peacefully into eternal rest on November 9, 2021 with his family by his side. Steven was born in Schenectady March, 1931. He spent most of his life in Rotterdam and more recently resided in Scotia, NY. He was the son of the late Patrick and Helen (LaFreniere) Popolizio. Steven married the love of his life, the late Ida Byrnes in 1954. He worked 36 years as a millwright for GE/Knolls Atomic Power Laboratory in Niskayuna. Before and after his retirement, he did not sit still. While working at KAPL, he also worked weekends alongside his father and mother at Mayfair Pizza, in Scotia, NY. After retirement, he could be found at family and friends houses doing “fix it” projects, as well as driving friends and family to appointments and anything else someone needed. Steve did not know how to say “no”. Steve had many hobbies and interests. He spent many enjoyable years camping with his companion, the late Marie VanHorn along with other friends. He was a former member of the Rotterdam Elks, the GEAA , the Rotterdam Senior Men’s golf league and several bowling leagues throughout his long life. Steve was often found playing golf with his grandson, Scott and nephew, Rick. He always looked forward to playing poker with his Aunt Eleanor and Aunt Clem. Steve enjoyed his many trips to the casinos, scratch-off lottery tickets and spending time with his grandchildren and great-grandchildren. After Steve’s son-in-law, Tom, passed away he became a wonderful father figure to his grandchildren. He never missed a sporting event or celebrating their achievements. He was their biggest cheerleader! Steve could be found at many gatherings telling stories and jokes. Often his children would cringe when he started telling his jokes, not knowing what punch line he would forget and make up, however, they would give anything to hear one more now! Most recently, Steve’s family had a “90th Birthday by Mail”. He ended up with over 80 birthday cards and hundreds of lottery scratch-off tickets. He was quoted many times as saying “This was my best birthday ever”. The family would like to thank everyone who made that birthday so special. The family would especially like to thank Sue and Rick Allrich for their many years of friendship and most recently caring for Steve. Along with many other friends and family who helped Steve in his recent journey. Steve is survived by his children Cindy Brennan of Schenectady, Steven (Deborah) Popolizio Jr. of Tehachapi, CA and Diane (Steve) Ostrander of Rotterdam. Steve is also survived and better known as “Pepa”, by his grandchildren, Dawn (Dennis) Allen of Albany, Scott (Mandie) Brennan of Voorheesville and Ryan and Kelly Popolizio of Tehachapi, CA. He is also survived by the newest joys of his life, his great-grandchildren, Selah and Caleb. Steve is also survived by his sister, Barbara (Ken) Archambault of Nevada along with several nieces, nephews and cousins. Because Steve was such a giving person, in lieu of flowers, the family is asking for donations to the Alzheimer’s Association, 4 Pine West Plaza, Ste. 405, Albany NY 12205 (in honor of a close friend’s efforts) or the charity of your choice. Calling hours will be held on Saturday from 4-6 pm at the DeMarco-Stone Funeral Home, 1605 Helderberg Ave. in Rotterdam. Funeral services will begin at the funeral home at 6pm. Burial will be private.

Steven A. Popolizio, 90, entered peacefully into eternal rest on November 9, 2021 with his family by his side. Steven was born in Schenectady March, 1931. He spent most of his life in Rotterdam and more recently resided in Scotia, NY. He was... View Obituary & Service Information

The family of Steven A. Pololizio created this Life Tributes page to make it easy to share your memories.

Send flowers to the Pololizio family.