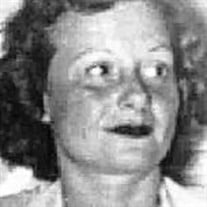 It is with deep love that we mourn the loss of Teresa Farina who died peacefully, at the age of 104, at her home in Troy, on April 5, 2022. Born in Troy on April 4, 1918, Teresa was the youngest of four children of Guiseppa Vacchariello (nee Mazzariello) and Michael Vacchariello. Teresa was the widow of Michael J. Farina (nee Michele Giovanni Farina). Between the world wars, Teresa worked at Cluett, Peabody & Co., in Troy, producing Arrow brand collars and cuffs. However, she was too eagerly captivated during the Great Depression by the sweetness of romance with Michael, and inspired subsequently by insights gained from Irma Rombauer's Joy of Cooking and Dr. B. Spock's The Common Sense Book of Baby and Child Care, to remain in textile manufacturing. As it happened, she became energized by a panoply of commitments, propensities, and merriments, particularly her 63 years of marriage to beloved Michael, a wonderful husband and father, a master tinsmith, and a talented musician; her motherly engagements with children, grandchildren, and great-grandchildren; her penchant to master Italian-American cuisine and home gardening; her partiality for not just American jazz but also soccer and ice hockey; and her desire for vigor and well-being that motivated her heavy-duty, power walking routines throughout the Albany area and along several Floridian coasts. Mrs. Farina was predeceased by her grandchildren, Karen Kearns and Kevin Kearns. She is survived by her daughters, Josephine Kearns as well as her husband Garry, and Nancy Riel as well as her husband Ronald; and by her son, Blaise Farina. She is also survived by her grandchildren, Terri Riel, Nicole Riel, Mark Riel, and Kenneth Kearns; as well as by her great-grandchildren, Jaisah Orton, Paige Kearns, Juliun Kearns, Blaise Kearns, and Alexander Verchereau. Mrs. Farina also parts with the cherished group of dear friends and gifted caregivers who called her "T" and will remember her boundless energy, good humor, and guileless candor: notably, Deanna Farrell, Daysia Lozada, Daniela Filmer, Theresa Lent, Theresa Watts, Kristi Kenyon, Brittney Nichols, and Rhonda DeVoe. An awe-inspiring survivor of two pandemics, Mrs. Farina was too frisky a personality to be forgotten anytime soon by her talented, medical support team: namely, Miranda Dunham, Rhonda Esposito, Kim Ryan, Brooke Vautrin, and Maria Thiele. A private funeral service in memory of Teresa Farina will be conducted during April 2022 in St. Mary's Cemetery in Troy. In lieu of flowers, donations in Teresa Farina's memory may be sent to St. Peter's Home-based Primary Care, 433 River St., Suite 3000, Troy, NY, 12180, and/or to the Community Hospice, 445 New Karner Rd., Albany, NY, 12205.

It is with deep love that we mourn the loss of Teresa Farina who died peacefully, at the age of 104, at her home in Troy, on April 5, 2022. Born in Troy on April 4, 1918, Teresa was the youngest of four children of Guiseppa Vacchariello (nee... View Obituary & Service Information

The family of Teresa Farina created this Life Tributes page to make it easy to share your memories.

It is with deep love that we mourn the loss of Teresa Farina...

Send flowers to the Farina family.