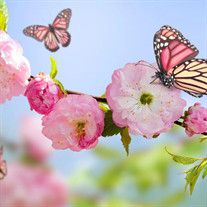 Theresa “Cubbie” MacCubbin passed away on February 7, 2022, just a month shy of her 95th birthday. She had spent the past 10 years in nursing or memory care in Florida. Only a month before her peaceful passing, she survived a bout of Covid-19; this and her advanced age show how great a fighter she was. Theresa was born on March 9, 1927, in Green Island, NY to Margaret Rose Corbett and Phillip E. Pfaffenbach. Before retirement, she spent most of her life no farther than 25 miles from her birthplace. We all can agree— she had a long, active, and full life.Theresa married her fiancée, George “Mac” MacCubbin, Jr., in September 1946 after he returned from war early. They rented their first home in North Troy. It was a one room apartment complete with a bathtub in the kitchen! They later moved to Troy “to set up housekeeping” and begin raising their family. After many years in Troy, they bought a home in Clifton Park, where they continued to raise their three daughters: Patricia, Jean and Mary Theresa.Being a stay-at-home mom for most of her life, she regularly volunteered for her daughters’ activities— school trip chaperone, Blue Bird leader, Campfire Girls events, and school proms. She was also active with weekly card or scrabble nights, pizza nights, backyard clam steams, spending weekends camping near Lake George with Parents Without Partners, and, interestingly for the times, being the sole fisherwoman on Hadlock Pond. She always found time to feed, clothe and bathe the needy neighborhood children and the cousins, sometimes giving away her daughters’ toys, books, or games, and shoes or clothing they had not even outgrown. If you ask her daughters, she was a terrible cook, “perfecting” recipes that Mac brought home from the Navy. If the whole meal wasn’t boiled or out of a can, it was made in a frying pan. Happily, for all, the microwave “improved” her culinary skills. We all were thankful that a little ketchup could add a lot to dry meatloaf or fried beef liver and onions. Cubbie did excel in baking, with her lemon meringue pies being the most memorable..If you were a neighbor friend, there was always a pot of coffee perking on the stove and a full pack of cigarettes to share in the kitchen or outside near her rock garden. In the early years, she had parakeets (all named Billy), and for many years a miniature poodle or two. After she moved to Florida, unwanted cats seemed to end up on her doorstep and, of course, they were fed and later shared her home. After retirement she volunteered at the nearby resale shop, played in the clubhouse band, and enjoyed weekends on a pontoon boat on Lake Harris. Even as her dementia progressed, you could find her tapping her feet to the music or snapping her fingers to oldies on the radio.Suddenly losing her husband “Mac” when they were both 37, she had to find work to raise three daughters; this was the first time for her to work outside the home since the WWII war effort. She was employed by Shenendehowa Central School as a cafeteria aide. Later she became a bus driver for children with disabilities at a time when education of children with different abilities was not mainstreamed, thus creating the need for those children to travel outside the school district for their education. She made many friends, young and old through these jobs.Cubbie dropped out of school during the war to work at the Fuller Brush factory. “Her girls” later learned it was there where she first paid union member dues -- 19 cents from her weekly paycheck! At retirement she was a dues-paying member of CSEA. Like many New Yorkers at retirement, she moved to sunny Florida. She wanted to be closer to her brother Eddie and his wife Susie, as well as to other Shenendehowa bus driver retirees. When the need arose to move to assisted living and later memory care, Cubbie vehemently wanted to stay in Florida; she grew to love the sunshine and was not fond of the cold icy winters in the north where her girls all lived.She was preceded in death by both her parents, her husband George L. MacCubbin, Jr., and all three siblings: brothers Phillip (Pat) and Edward Pfaffenbach, and sister Irene Maroncelli. She leaves behind her three daughters, their spouses and two grandsons — Patti (Ernest Prentice) of Burlington VT, Jean (Alan Seeger) of Madison WI, Mary (Scott Bulger) of Northwood, NH, and the grand boys — Alex Gray and Burke Bulger. She is also survived by nieces, nephews and their children.The daughters would like to thank Marti McClintock, her Florida guardian for over 10 years, the staff at Bayview Center, Eustis, FL, and the other nursing homes that Marti had found for her long-term care and comfort. All Faiths Cremation Society of Lady Lake, FL assisted with the arrangements. To add a memory or condolences, go to: obituaries.allfaithscremations.com.There will be no services, but friends and family are encouraged to listen to some oldies and enjoy a cold beer or two to celebrate

Theresa &#8220;Cubbie&#8221; MacCubbin passed away on February 7, 2022, just a month shy of her 95th birthday. She had spent the past 10 years in nursing or memory care in Florida. Only a month before her peaceful passing, she survived a bout... View Obituary & Service Information

The family of Theresa M. MacCubbin created this Life Tributes page to make it easy to share your memories.

Send flowers to the MacCubbin family.