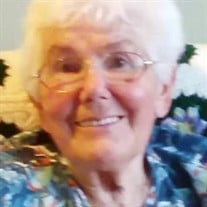 Trudy Van Ryn passed away peacefully at the Wesley Center in Saratoga Springs, NY on April 7, 2022. She was born Geertruida Hendrika Kleinveld in Amersfoort, Netherlands on April 5, 1929 and emigrated to Canada in 1949. Upon her marriage to Simon Van Ryn in 1951, she immigrated to the U.S. and settled in Delmar, NY. She became a proud U.S. citizen on June 18, 1957. Trudy loved her nursing career and worked in several hospitals in and near Albany, NY while raising five children. Trudy also volunteered in her community and was a cub scout and girl scout leader, St. Thomas Parish volunteer, Delmar Fire Department auxiliary member, Red Cross blood donor, and Adamsville Ancients Fife and Drum Corps member. Trudy enjoyed the outdoors and camped with her family and scout troops and was active in the Capital Area Ski Touring Association, local chapter of the Adirondack Mountain Club, Crooked Canes and Seniors on Bikes. After her husband passed away in 2003, Trudy moved to Queensbury, NY and was an active member of the Glen Lake community. She is survived by three sons: Leonard Van Ryn (Rita) of Cohoes, NY, Jacques "Jack" Van Ryn (Debbie) of St. Louis, MO, and Paul Van Ryn (Lisa) of Albany, NY; and two daughters: Debbie Van Ryn of Brooklyn, NY and Tammara Van Ryn (Chris) of Saranac Lake, NY; as well as by eight grandchildren; four great-grandchildren; three sisters; and many other family and friends. She was predeceased by her husband, two grandchildren, four brothers and four sisters. Information about a memorial service in May, and an online guest book are in care of Compassionate Funeral Care, 402 Maple Ave., Saratoga Springs, NY 12866, www.compassionatefuneralcare.com. Memorial contributions can be made to the Adirondack Mountain Club, www.adk.org, or to the American Heart Association.

Trudy Van Ryn passed away peacefully at the Wesley Center in Saratoga Springs, NY on April 7, 2022. She was born Geertruida Hendrika Kleinveld in Amersfoort, Netherlands on April 5, 1929 and emigrated to Canada in 1949. Upon her marriage to... View Obituary & Service Information

The family of Trudy H. VanRyn created this Life Tributes page to make it easy to share your memories.

Trudy Van Ryn passed away peacefully at the Wesley Center in...

Send flowers to the VanRyn family.