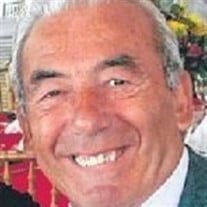 Valentino "Val" Salustri, 84, passed away on Sunday, November 28, 2021, at Albany Medical Center after a valiant battle with multiple myeloma. He was born in Albany and was predeceased by his parents, Dominick and Annunsiata DiGiannantonio Salustri; and his sister, Speranza (Salustri) Strazzeri. A graduate of Christian Brothers Academy, class of 1956, Val was proud of his Italian heritage and his service in the United States Marine Corps. Above all, he was a generous soul who was devoted to his family. He most enjoyed a backyard barbecue, a competitive game of bocce and spending time with his grandchildren and great-grandchildren. Val worked as a butcher for many years with Grand Union and Price Chopper until retirement. For many years he owned and operated Genoa Imports, an Italian specialty store in Albany with his brother-in-law Frank Strazzeri. Val was proud that he played in a 65-year-old basketball league, where they traveled to a tournament in Utah and played against former NBA stars, Phil Jackson and Charlie Rosen. Val is survived by his loving wife of 61 years, Joan DeLorenzo Salustri; his children, Maria (Alex) Balogh, Valerie (Kevin) Gordon and Dominick (Teresa) Salustri; eight grandchildren, Jamie Bonnett, Ashley Gordon, Steven Gordon, Anthony and Nicholas Salustri, Alexander, Anthony and Andrea Balogh; two great-grandchildren, Madison and Logan Bonnett; and a niece and nephew, Nancy St. Louis and Joseph Strazzeri. Relatives and friends are invited to visit with Val's family on Friday, December 3, from 10 to 11:30 a.m. at St. Lucy / St. Bernadette Church, Altamont. His funeral Mass will follow at 11:30 a.m. Masks are required. The Rite of Committal will be held in the Calvary Cemetery, Glenmont, immediately following the Mass. Those wishing to remember Valentino in a special way may send a contribution to St. Jude Children's Research Hospital, 501 St. Jude Place, Memphis, TN, 38105-9959.

Valentino "Val" Salustri, 84, passed away on Sunday, November 28, 2021, at Albany Medical Center after a valiant battle with multiple myeloma. He was born in Albany and was predeceased by his parents, Dominick and Annunsiata DiGiannantonio Salustri;... View Obituary & Service Information

The family of Valentino "Val" Salustri created this Life Tributes page to make it easy to share your memories.

Send flowers to the Salustri family.