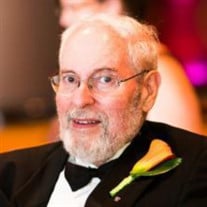 Wendell Neugebauer passed away on March 5, 2022, at Albany Medical Center after a year-long residence at Kingsway Arms. Wendell was born on March 15, 1935, in Dessau, Germany to Franz J. and Emilie. He was a spirited child who delighted in the pursuit of knowledge. He came to America in 1947, learned English from the Lone Ranger radio program, and graduated from Union College and MIT with degrees in Electrical Engineering. Wendell had a long career as an electrical engineer at General Electric Company where he worked on the AWACS radar, Star Wars defense systems, and power grid technologies. He was a member of IEEE and Knights of Columbus. Wendell was active in many charitable causes, primarily the pro-life movement. His ability to craft and defend an argument was extraordinary. No scientific, mechanical, or electrical problem was beyond his understanding. He loved animals and was a lifelong vegetarian, an avid cyclist, and a powerful swimmer. His greatest joy in life was his family. When his children were young, he was an enthusiastic participant in their school and church activities. He did not bring his work home: he spent his free time teaching his children music appreciation, mathematics, physics, chess, and more. He loved working in the garden and woods, teaching his children survival skills, and taking them camping, swimming, canoeing, hiking, and stargazing on clear nights. Wendell also enjoyed travel and took his family on as many trips as he could. Thanks to him, his children love to travel and pursue knowledge and activity also. He especially enjoyed relating stories from his youth, many of which he eventually wrote down so that they would never be forgotten. The thousands of photographs he took over the years allow his family to see the world as he saw it – full of promise, beauty, and love. He is survived by his beloved wife of 61 years, Sheila, and his children, Anna (John), William, Charles (Ann), Julie (Ronald), Katrina (David), Sarah (Scott), eight grandchildren, Catherine (Robert), John, Alexander, Paul, Julia, Ella, Lila, and Ava, and two great-grandchildren, Leonardo and Enzo, as well as many nieces, nephews, grand-nieces, and grand-nephews. His legacy will live on. He is predeceased by his four siblings Gisela, Christof, Constantine, and Gerald and his beloved great-granddaughter Amelia, but survived by his relatives by marriage Margaret (Gerald, deceased), Thomas (Elsa), Lorraine (Richard, deceased), Anthony (Linda), Maryann (Rev. Demetrios), Peter John (Mary Beth, deceased), and several first and second cousins. Wendell was loved by all who knew him, and he will be greatly missed. Visitation will be at Armer Funeral Home, Inc., 39 East High Street, Ballston Spa on Friday, March 11, from 4 pm to 6 pm. Additional visitation will begin at 8:30 am on Saturday, March 12 at St. Mary’s Church, Milton Avenue, Ballston Spa followed by a mass of Christian burial at 9:30 am.

Wendell Neugebauer passed away on March 5, 2022, at Albany Medical Center after a year-long residence at Kingsway Arms. Wendell was born on March 15, 1935, in Dessau, Germany to Franz J. and Emilie. He was a spirited child who delighted in the... View Obituary & Service Information

The family of Wendell Neugebauer created this Life Tributes page to make it easy to share your memories.

Wendell Neugebauer passed away on March 5, 2022, at Albany Medical...

Send flowers to the Neugebauer family.