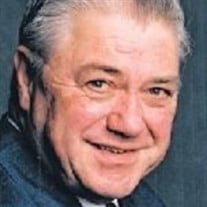 William E. Burkhard, "Bill," 87, passed on June 2, 2022, at St. Peter's Nursing and Rehabilitation Center after a brief illness. Born in Albany, he was son of the late Albert and Janet (Taaffe) Burkhard. Bill graduated from Christian Brothers Academy, class of 1953, and attended Manhattan College and R.P.I. He served in the Marine Corps from 1954 - 1957. He was married to Mary Lou (McCann) Burkhard for 64 years, and is also survived by his children: William E. Burkhard Jr., his wife, Ellen (Green), and their children, Carl and Kathleen; Matthew R. Burkhard, his wife, Judi (Arnold), and their children, Brian, Emily and Abby; Elizabeth Santella, her husband, Victor, and their children, Nicholas and William; and Ruth Pillittere, her husband, Michael, and their children, James, Michaela and Timothy. Bill was predeceased by his daughter, Arlene; son, James; and his brother, Albert. Bill worked for the state of New York for 37 years. He was active with St. Thomas Parish as a lector, eucharistic minister, auditor and usher, and chairman of DDP. Bill was a committeeman of the Bethlehem Democratic Committee and served on the Albany County Board of Elections. After his retirement, Bill served as an ambassador at the Albany County Airport. He was an assistant scout master for Troop 58 in Elsmere, and served on the board of directors for RSS for 42 years. Bill enjoyed traveling with his wife Mary Lou to Germany, England, Ireland, France, Italy, Hawaii, St. Thomas, Bahamas, St. Martin, Nassau and Aruba. A Mass of Christian Burial will be celebrated on Monday, June 6, at 10 a.m. in St. Thomas the Apostle Church, 35 Adams Place, Delmar. The family requests for all who are in attendance to wear a mask. Interment will follow the Mass in St. Agnes Cemetery, Menands. In lieu of flowers, donations may be made to Christian Brothers Academy, 12 Airline Dr., Albany, NY, 12205 or St. Thomas the Apostle School, 42 Adams Pl., Delmar, NY, 12054. O

The family of William E. Burkhard created this Life Tributes page to make it easy to share your memories.

Send flowers to the Burkhard family.