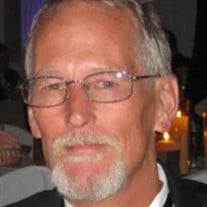 William “Bill” Leary, Sr., 57, passed away unexpectedly on Friday, August 23, 2013. Born in Albany, he was the son of Virg and the late Ned Leary. Bill enjoyed being busy outdoors and had a hobby for each season: fishing, golfing, hunting and spending many sunny afternoons outside with his family. For many years, Bill was active in his golf league at Western Turnpike and volunteered countless hours processing venison for the Venison Donation Coalition. Riding his Harley became a passion and in his free time Bill enjoyed watching Sons of Anarchy and reading outdoor magazines. He loved the company of the dogs he owned throughout his life: Linc, Barney, Clyde, Bogey and Doug. He was always available to lend a helping hand and found great satisfaction in being a resource for friends and family. Bill loved being able to contribute. Bill served in the United States Navy aboard the USS Harry E. Yarnell during the Vietnam War era. He was able to see the world, including visits to Spain, Cuba and Greece. Bill was a licensed plumber with over 30 years of experience. He was a dedicated employee of Northeast Health for 18 years before becoming the Director of Facilities at Christian Brothers Academy in 2010. Bill’s greatest accomplishment and source of pride were his children Lauren, Billy and Meaghan, and they will cherish memories of happy times spent with their dad. Bill’s saddest moment was losing his infant daughter, Lindsay. We take comfort in knowing that Bill is now with Lindsay and Ned, and together they are watching over us. Bill will be missed by his loving wife Linda; mother Virg; children Lauren (Christian) Grimshaw, Billy, and Meaghan; siblings Shows (Robin), Kim (Jim) Oppelt, Maggie (Mike Coager); mother-in-law Grace; brother-in-law Paul; and many aunts, uncles, cousins, nieces, nephews, friends, and soon to arrive first grandchild. Along with his father and daughter, Bill was also predeceased by his father-in-law Paul and sister-in-law Melissa. Memorial Services will be held on Thursday at 7:00 pm at Christian Brothers Academy Chapel, 12 Airline Drive, Albany, NY 12205. Calling hours will precede the service from 4 to 7pm at the CBA Chapel. In place of flowers, memorial contributions may be made to Western Turnpike Rescue Squad, Christian Brothers Academy or the American Lung Association.

William &#8220;Bill&#8221; Leary, Sr., 57, passed away unexpectedly on Friday, August 23, 2013. Born in Albany, he was the son of Virg and the late Ned Leary. Bill enjoyed being busy outdoors and had a hobby for each season: fishing, golfing,... View Obituary & Service Information

The family of William E. Leary Sr. created this Life Tributes page to make it easy to share your memories.

Send flowers to the Leary family.