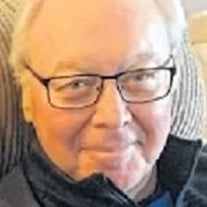 It is with profound sadness and a deep appreciation for his life, that the family of William James McCarthy Sr., "Bill," announce his passing, surrounded by his family on March 10, 2022, after a courageous battle with cancer. The essence of Bill was his strength and character. Bill's strength was rooted in his Catholic faith. His character was demonstrated in his love for family, his integrity in personal and professional settings, and his kindness and generosity of heart to others. Bill was willing to help anyone who needed it. As Bill always said to his family, the true meaning in life comes from giving back to others and Bill carried out this guiding principle every day of his life. Bill was born in 1954 in Albany. He was the devoted husband and best friend of Maureen McCarthy for over forty-three years. Bill was the loving father to his two cherished sons, William James McCarthy Jr. (Mary Slattery McCarthy) and John David McCarthy (Lilith Brodsky McCarthy). Bill was the treasured "Granddad" to his grandson, William James McCarthy III, and was a special step-grandfather to Kellan and Paige Egan. Bill was the loving son of Elizabeth "Betsy" McCarthy. The laughter that filled the room when Bill and his mother were together will never be forgotten. Bill was predeceased by his larger-than-life father, Justin J. McCarthy. He was the cherished "oldest" brother to his sister, Maureen Bennett (Jim), and brothers, James McCarthy (Carol), Justin McCarthy, and Patrick McCarthy (Erin). Bill deeply loved his siblings, and his time with them was always filled with joy and laughter. Bill was a loving son-in-law to Joan Cassidy; and much-loved brother-in-law to Peg Brearton (Jim), Lynn Overacker (Jim), Terry Cassidy (Peg), Kelly Wetherbee (Jeff), and Kevin Cassidy (Robin). Bill was predeceased by his good friend and father-in-law, Cyril Cassidy. Bill was the uncle of twenty-one nieces and nephews, each of whom he loved in their own special way. Bill was a graduate of Christian Brothers Academy (C.B.A.), Siena College with a Bachelor of Science in finance, and the Lally School of Management and Technology at Rensselaer Polytechnic Institute with a Master of Business Administration. While at C.B.A., Bill was an outstanding football, basketball, and track and field athlete, and was inducted into C.B.A.'s Athletic Hall of Fame. In his later years, Bill volunteered at National Little League, Albany Babe Ruth, and Albany's American Legion team where he served as a coach and mentor to many athletes. Bill also re-entered the athletic arena with his love of golf and went on to win a Club Championship at Normanside Country Club and numerous Member-Guest and Club tournaments. Bill was a longtime proud partner at Bolton-St. Johns, LLC, a premiere New York government relations and public affairs consulting firm, where he so proudly provided strategic advice, counsel, and value-added services to his many clients. Bill was a member of the Mater Christi Church. He was also a member of Normanside Country Club, Albany Country Club, and the Fort Orange Club where he shared many friendships and good times. Relatives and friends are invited to visit with Bill's family on Monday, March 14, from 4 to 7 p.m. at the Daniel Keenan Funeral Home, Inc. 490 Delaware Ave., Albany. His funeral Mass will be celebrated on Tuesday, March 15, at 10 a.m. in The Parish of Mater Christi, 40 Hopewell St., Albany. The family kindly requests those who are unvaccinated to wear a mask for all services. Interment will follow the Mass in St. Agnes Cemetery, Menands. In lieu of flowers, those who wish may send memorial contributions to CHARGE Foundation Syndrome, 318 Half Day Road, #305, Buffalo Grove, IL, 60089, an organization raising awareness and treatment for those affected by CHARGE Syndrome.

It is with profound sadness and a deep appreciation for his life, that the family of William James McCarthy Sr., "Bill," announce his passing, surrounded by his family on March 10, 2022, after a courageous battle with cancer. The essence of... View Obituary & Service Information

The family of William J. McCarthy Sr. created this Life Tributes page to make it easy to share your memories.

It is with profound sadness and a deep appreciation for his life,...

Send flowers to the McCarthy family.