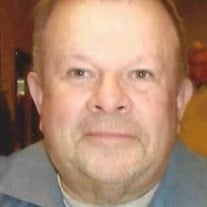 William J. Molesky, Sr., 72, of Colonie shuffled off this mortal coil Tuesday, April 12, at St. Peter’s Hospital surrounded by his loved ones. Born in Troy in November of 1949, he was the son of the late William P. and Helen Arpin Molesky of Cohoes. “Wild Bill” graduated Shaker High School, after which he volunteered for the Air Force during the Vietnam War, and received an honorable discharge. He later worked as an Albany County Deputy Sheriff for 25 years before retiring in 1997. Not long after his first retirement, Bill began working for the South Colonie Transportation Department which he did for 20 years. In any spare time, Bill enjoyed collecting military memorabilia, traveling, and volunteering as Scout Master for Boy Scouts Troop 22. What he loved most of all was being a grandpa. Bill is survived by his loving wife of 48 years, Donna, his sons William Jr. (Carrie) Joseph, John and Justin, all of Colonie NY; his brothers David (Marcia) of Albany, and Kevin (Michelle) of Kissimmee Florida; Brother in Law James (Donna) McNeil of Colonie; Nephews Adam (Bella) and Kyle Molesky, Maria McNeil (his favorite niece), and grandsons William III, whom he affectionately called “beans” and Nathan “the Potato who Pop”, always needed to know what he was doing. He will also be missed by his pup, Bree. Relatives and friends are invited to attend calling hours on Monday, April 18, 2022 from 4:00pm- 7:00pm at New Comer Cremations & Funerals, 343 New Karner Rd. Colonie, NY 12205. A Mass of Christian burial will be celebrated at 10am on Tuesday, April 19, 2022, at Christ our Light Church, at 1 Maria Dr, Albany, NY 12211. Interment will follow at Our Lady of Angels Cemetery, at 1389 Central Ave, Colonie, NY 12205.

William J. Molesky, Sr., 72, of Colonie shuffled off this mortal coil Tuesday, April 12, at St. Peter&#8217;s Hospital surrounded by his loved ones. Born in Troy in November of 1949, he was the son of the late William P. and Helen Arpin Molesky... View Obituary & Service Information

The family of William J. Molesky Sr. created this Life Tributes page to make it easy to share your memories.

William J. Molesky, Sr., 72, of Colonie shuffled off this mortal...

Send flowers to the Molesky family.