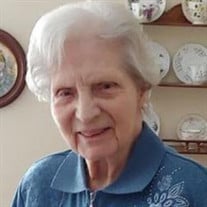 Mrs. Anna Dotha Pemrick, 94, wife of the late James R. Pemrick, died Nov. 15, 2020 at the Fairways at Carolina Meadows. Mrs. Pemrick was born December 1, 1925 in Troy, NY. She was raised in Lansingburgh, graduating from Lansingburgh High School in 1945. She married James R. Pemrick in 1948, and enjoyed a 65-year marriage, until his death in 2013. Anna relocated to Chapel Hill in 1987, following her late husbands’ retirement from General Electric. They were active parishioners of the Newman Catholic Student Center, where Anna was a Eucharistic Minister, bringing communion to homebound congregants. Anna is survived by her children, Keith Pemrick, and his wife, Sally, of Franklin, PA, Kathy Bishop, and her husband William, of Mountain View, CA, Kolleen Morse, and her husband David, of Irondequoit, NY; grandchildren, Stacey, Amy, Sarah, Laurie, Todd, Shaun, Danny, Lindsay and Heather; great- grandchildren, Haley, Callie, Cameron, Aaron, Davis, Madison, Lilly, Marshall, Emmett and Leo; and nieces and nephews. In addition to her husband and parents, Anna was preceded in death by her daughter, Karen Glassett. The family will have a graveside memorial service in Lansingburgh, NY at a time to be announced. In lieu of flowers, please send memorials in Anna’s name to the Catholic Charities for your Diocese.

The family of Anna D. Pemrick created this Life Tributes page to make it easy to share your memories.

Send flowers to the Pemrick family.