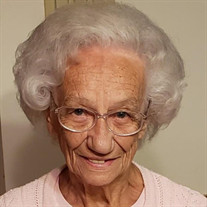 Anne Bogdan, affectionately known as Nonnie, entered peacefully into eternal life after a short stay at the Teresian House on Saturday, November 27, 2021. Anne was born on November 11, 1927 to the late Aunfer and Mary (Niekasz) Fedasz of Schenectady. Anne lost both of her parents at a young age and grew up as part of the Rainville Family. Anne graduated from St. Columba’s High School in Schenectady and went on to study nursing at St. Mary’s Hospital in Amsterdam, NY. She will be remembered by many at St. Mary’s as “Annie – Dignity and charm and so many other nice qualities” It was while she was in Nursing school that she met the love of her life, Boleslaus (Boley) Bogdan. They were married by her brother, Fr. Laurance Rainville in St Joseph’s Church in Scotia in 1950. She was predeceased by her husband, Boley in 2006 as well as her sister, Helen Malacynski and brother, Fr. Laurence Rainville. She is survived by her children, Susan Bogdan (J. Michael) Ritty of Feura Bush, Catherine (Frank Jr.) Graziano of East Greenbush, Andrew (Ellen) Bogdan of Latham; loving grandmother of Frank Graziano III, James (Courtney) Graziano, Matthew (Lindsay McAleer) Bogdan, and Christopher (Susanna Cai) Bogdan; loving great grandmother to Dominic, Vincenzo, and Luca Graziano and Mackenzie Bogdan. Also survived by sister Mary Fedasz and nieces, Joan Bietka and Deborah Studer. Anne will be remembered as a natural caretaker, her role as nurse, wife, mother, and grandmother was her number one priority and passion. She followed her children and grandchildren’s interests closely always encouraging and cheering them on academically and athletically. She loved her grandchildren dearly and played a huge role in their care as they grew up. Anne cared for her community as well. Anne was an active member of St. Gabriel’s Church, St. Gabriel’s Women’s Club, the Rotterdam Lions Club and the Rotterdam Lioness Club. The family wishes to the thank the staff of the third floor of the Teresian House for the excellent care provided to Anne during her stay there. The family appreciates the care and kindness extended to them as well. Visitation will be held on Wednesday December 1, 2021 from 4pm to 7 pm at DeMarco Stone Funeral Home, 1605 Helderberg Ave, Rotterdam NY. A mass of Christian Burial will be held on Thursday December 2, 2021 at 10:30 am at St. Gabriel’s Church, 3040 Hamburg St. Rotterdam NY. Please note that masks will be required to enter Church.

Anne Bogdan, affectionately known as Nonnie, entered peacefully into eternal life after a short stay at the Teresian House on Saturday, November 27, 2021. Anne was born on November 11, 1927 to the late Aunfer and Mary (Niekasz) Fedasz of Schenectady.... View Obituary & Service Information

The family of Anne R. Bodgan created this Life Tributes page to make it easy to share your memories.

Send flowers to the Bodgan family.