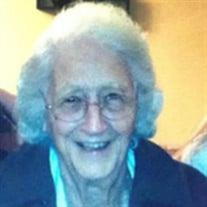 Beatrice M. DeBlasio, 105 entered peacefully into the Arms of the Lord on February 6, 2022. Ms. DeBlasio was born and educated in Schenectady and was a 1935 graduate of the former Nott Terrace High School. She started her career working for the Schenectady Chamber of Commerce and followed by 39 years where she was manager of Pensioner’s Insurance at the General Electric in Schenectady retiring in 1981. She was a member of the GE Quarter Century Club, the GE Women’s Club, and the GE Athletic Association. After her retirement from GE, she continued to work at Mr. Meyers Bakery with her nephew until she was 90 years old. Beatrice was a woman of great faith and a lifelong communicant of St. Anthony’s Roman Catholic Church in Schenectady, and a member of its Sacred Heart League. She was also a member of St. Anthony’s Choir for over 50 years and an annual Festa volunteer. Ms. DeBlasio was a volunteer for the City Mission and Schenectady Inner City Mission. Beatrice was devoted to her family and was a great example of how to live out the Catholic faith. She was a “prayer warrior” and prayed the rosary daily for not only her many family members but anyone in need. Her bright smile, stories, memories, and comical quirks will be dearly missed. Beatrice was the daughter of the late Anthony and Florence DeBlasio and predeceased by her siblings, Pat DeBlasio, Angie Campriello, John DeBlasio, Alfred DeBlasio, Mary D'Amico, Dolores Sacchetti, and Evelyn Meyers. Survived by her loving sister, Anna Goska, and many loving nieces, nephews, great-nieces, and nephews near and far. The family would like to extend their sincere thanks and gratitude to Diane Hurd for her remarkable care and friendship and to Community Hospice Schenectady. Services will be held on Thursday at 10:30 am from the Rossi & Ditoro Funeral Home, followed by a Mass at St. Anthony's Church, Seward Place at 11 am. Interment will follow in St. Anthony's Cemetery, Glenville. Relatives and friends are invited and may call at the Rossi & Ditoro Funeral Home on Thursday morning from 8:30 am until the service.

Beatrice M. DeBlasio, 105 entered peacefully into the Arms of the Lord on February 6, 2022. Ms. DeBlasio was born and educated in Schenectady and was a 1935 graduate of the former Nott Terrace High School. She started her career working for... View Obituary & Service Information

The family of Beatrice M. DeBlasio created this Life Tributes page to make it easy to share your memories.

Beatrice M. DeBlasio, 105 entered peacefully into the Arms of...

Send flowers to the DeBlasio family.