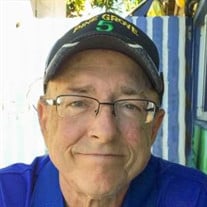 Daniel S. Smith, of Princetown, NY, passed away Friday, October 1, 2021, after a courageous battle with cancer. He was the owner and operator of the former Optical Fashions of Scotia, and was a well-respected businessman and optician for over 30 years. Dan’s pastimes included a long stint as a bowler in the GE Gas Turbine Bowling league, membership in the Foremen Golf League at Orchard Creek Golf Course, gardening, and a deep love for attending all of his grandkids’ athletic and musical events. Many a season was also spent in the Adirondacks with his family and dear friends – camping, throwing horseshoes, and cutting wood, all things he enjoyed extensively. In his retirement, Dan faithfully worked for Mohonasen Central School District driving a school bus, landscaped at his neighbor’s home, contributed as fire police and treasurer for Pine Grove Fire Department, and worked at Orchard Creek Golf Course as a ranger for several years. Dan was born on October 8, 1949 to Stephen & Doris (Brown) Smith of Princetown, at Bellevue Maternity Hospital in Niskayuna. He lived his entire life in Princetown, becoming a cherished friend and neighbor to the many people with which he crossed paths. Dan was a constant companion, and was always seen as a friendly smile, a helping hand, and had an unassuming and quiet confidence in his nature. Forever curious, he was always interested in exploring the newness of his surroundings, and surveying the scene whether it be from his window at his shop, the docks at Cape Cod, the Adirondacks, or Florida, or even from his favorite chair at home. Dan is survived by the love of his life, Kathryn (Slezak), and his three wonderful sons, Jason (Kristen), Benjamin (Samantha), and Matthew (Maria) - all of whom reside in the Capital District - along with five adoring grandchildren: Kyle, Lydia, Dannah, Callan, and Charlotte. He is also survived by his mother Doris, brother Tim (Vicky) of Anchorage, Alaska, sister Judy Knight of Schenectady, and many extended family members, cousins, nephews, nieces, as well as their children. Daniel was preceded in death by his father Stephen, as well as his younger sister, Suzanne LeClair. The family wishes to extend their heartfelt gratitude to all of the many nurses, staff, doctors & specialists who cared for Daniel at both St. Peters and Samaritan Hospital. A visitation & celebration of Daniel will be held at Bond Funeral Home, 1614 Guilderland Avenue, Schenectady NY 12306 from 5-7pm on Wednesday the 6th of October. The family will then hold a graveside service & short ceremony on Thursday morning (10/7) at 10AM at St. Cyril Cemetery, 611 Duanesburg Rd, Rotterdam, NY 12306.

Daniel S. Smith, of Princetown, NY, passed away Friday, October 1, 2021, after a courageous battle with cancer. He was the owner and operator of the former Optical Fashions of Scotia, and was a well-respected businessman and optician for over... View Obituary & Service Information

The family of Daniel S. Smith created this Life Tributes page to make it easy to share your memories.

Send flowers to the Smith family.