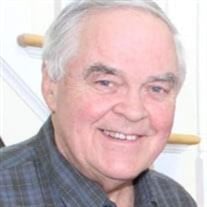 David L. Tenney, 82, loving husband, father and Poppy passed away peacefully on Monday, April 11, 2022 with his family at his side. He was born in 1940, the eldest child of Edgar J. and Anne Caffrey Tenney. He was a 1957 graduate of Vincentian High School where he excelled at clarinet and saxophone. He was proud to serve in the USMC and was honorably discharged in 1967. He graduated from Siena College and The College of St. Rose in preparation for his first career as a teacher. Eventually he followed another path becoming a bindery operator with C.F. Mark in Albany. He became a senior bindery operator and eventually retired from the NYS Senate Print Shop in 2000. David also ran his own business, Albany Laminating Service for many years. He was a parishioner and frequent lector at Blessed Sacrament in Albany. David was an avid student of history his whole life. He had a remarkable memory for dates and facts. He spent hours reading and keeping careful watch over his beloved neighborhood from his favorite rocking chair on the front porch-probably smoking a cigar and chatting with the passersby who all knew him. David spent many happy summers growing up fishing with his father and brothers, enjoyed playing chess, telling stories, meandering rides in the car, and watching his news programs. He is survived by his wife of 59 years, Natalie Marie, children Margaret (Richard) Burke, Paul Tenney, Mark (Christine) Tenney, Elizabeth (John) Kelsey, and Carolyn (Nicholas) Deso, as well as his grandchildren Elizabeth, Cailin, and Daniel Burke, Rachel, Adam, and Kathryn Tenney, Christopher, Andrew, Michael, and Annabel Kelsey, Natalie and Roman Deso. He is also survived by his sister Jeanne Graver, brother Ned Tenney, as well as many nieces and nephews. He was predeceased by his brothers Robert and Richard Tenney. A special thank you to the wonderful and caring staff at Teresian House who were so kind to David and the family during his stay. Relatives and friends are invited to visit with David's family Friday, April 15, 2022 4:00 pm to 7:00 pm at McVeigh Funeral Home, 208 North Allen Street, Albany, NY 12206. Please enter the funeral home from the rear parking lot entrance only. Funeral services MONDAY, April 18, 2022 at 9:00 am at Blessed Sacrament Church, 607 Central Ave (Father John Bradley Way) Albany, NY 12206 where his Funeral Mass will be celebrated. The Rite of Committal will be held at St. Agnes Cemetery, Menands, NY immediately following the Mass.

David L. Tenney, 82, loving husband, father and Poppy passed away peacefully on Monday, April 11, 2022 with his family at his side. He was born in 1940, the eldest child of Edgar J. and Anne Caffrey Tenney. He was a 1957 graduate of Vincentian... View Obituary & Service Information

The family of David L. Tenney created this Life Tributes page to make it easy to share your memories.

Send flowers to the Tenney family.