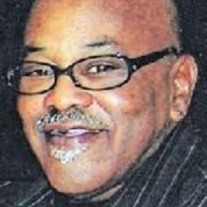 Edward B. Baskerville Sr., 79, passed away peacefully on Monday, May 9, 2022, with his loving family by his side. Edward was the son of the late William and Bessie Baskerville. After graduating from high school, Edward enlisted in the United States Army where he served until his honorable discharge. Edward became employed with Iron Workers Local #12 where he worked until his retirement. After his retirement, Edward was proud of his role as a greeter for Home Depot in East Greenbush. Edward was a proud member of First Church of Albany where he was a deacon. Edward enjoyed spending time with his entire family and loved cooking for them. He had a fond love of fishing, backgammon, and listening to music, especially Jazz. Edward was a lumberjack at heart. He was the best bartender and could be found serving his many friends and family at the Twilight Lounge in Albany. Edward truly loved every moment he spent with his grandchildren, often hosting them for weekend sleepovers and attending their sporting events. He had a passionate love for dogs. Edward will always be remembered by those he loved for his ability to make friends with everyone who had the honor of meeting him. Edward is survived by his children, Edward B. (Karen) Baskerville Jr., and Jovette (Austin) Young; his grandchildren, Nikisha, Dionna, Elijah, Devanee, and Dekairi; his great-grandchildren, Nashea and Milton; and many nieces, nephews, and friends. In addition to his parents, Edward was predeceased by his stepson, Kalvin Newsome; and his siblings, Earl Baskerville, Nona Flowers, Keith Baskerville, and Rebecca Baskerville. Calling hours will be held at New Comer Cremations & Funerals, 343 New Karner Road, Colonie on Monday May 16, from 3 to 7 p.m. A graveside ceremony will be held in the Calvary Cemetery, 481 Rte 9W, Glenmont, on Saturday, May 21, at 10:30 a.m. In lieu of flowers, the family requests that donations be made in Edward's name to the Mohawk Hudson Humane Society, 3 Oakland Ave, Menands, NY, 12204.

Edward B. Baskerville Sr., 79, passed away peacefully on Monday, May 9, 2022, with his loving family by his side. Edward was the son of the late William and Bessie Baskerville. After graduating from high school, Edward enlisted in the United... View Obituary & Service Information

The family of Edward Baskerville Sr. created this Life Tributes page to make it easy to share your memories.

Edward B. Baskerville Sr., 79, passed away peacefully on Monday,...

Send flowers to the Baskerville family.