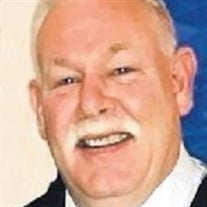 Edward "Rusty" D. Bogdan, 62 of Latham, passed away on April 26, 2022, at St. Peter's Hospital, surrounded by his loving family. Born in Pittsburgh, Pa., Rusty was the cherished son of Edward R. Bogdan and the late Saramae Waltz Bogdan. Rusty was a 1977 graduate of Shaker High School, where he excelled in athletics. He was a longtime employee of New York State with the last several years having been with the Executive Chamber. He was a proud Eagle Scout, where he learned to master various things alongside his dad who was the leader of his troop. Rusty was a baseball enthusiast and an avid Pittsburgh Steelers fan. Rusty will always be remembered as a gentle, kind, and patient man, who was always a listening ear for many. He had a way of bringing ease to people, at a time when those needed it the most. His most treasured time was spent with his family where he loved doing the simple things in life with them. He throughly enjoyed summer nights when he was able to listen to music and sit out on the back deck under the gazebo until dark. Rusty is survived by his loving wife of 34 years, Karen; and his children, David J. (Katelyn) Bogdan and Sarah M. Bogdan. He is also survived by his sisters, Susan Becmer and Barbara Ann Bogdan, as well as several sisters and brothers-in-law, nieces and nephews. He will be dearly missed by his canine companion, Miloh. Relatives and friends are invited to visit with Edward's family on Wednesday, May, 4, from 9 to 11 a.m, at the Cannon Funeral Home, 2020 Central Ave., Colonie. Funeral services will follow at 11 a.m. in the funeral home. Interment will be in St. Agnes Cemetery, Menands. Memorial contributions may be made to the Hope Club, 1 Penny Lane, Latham, NY, 12110, in support of local families that are dealing with cancer.

The family of Edward "Rusty" D. Bogdan created this Life Tributes page to make it easy to share your memories.

Send flowers to the Bogdan family.