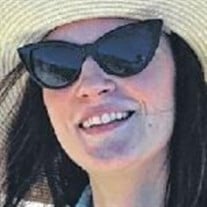 Gloria Christine Edick, 27 of Feura Bush, passed away on April 19, 2022. She was born on November 24, 1994, in Albany to David and Diane (Williams) Edick. Gloria attended local schools, and graduated with her bachelor's degree in political science from the State University of New York at Albany. While studying at UAlbany, Gloria was employed at Stewart's Shops in Feura Bush. After graduating, she was employed at Berkshire Bank. She started her career with Berkshire as a teller in the Guilderland branch, and was most recently employed as a compliance analyst at their corporate office in Albany. Throughout her life, Gloria always enjoyed spending her time in the great outdoors. She loved going on long walks in the woods, and going camping. She also cherished visits to local historical sites with her family, such as Olana, Hildene, and to New York City, where they visited the Metropolitan Museum of Art and the American Museum of Natural History. Gloria leaves behind her loving family, including her father, David Edick of Feura Bush; siblings, Joshua Edick of Feura Bush, Rebecca Edick of Austin, Texas, and Justin Peabody of Albany; her grandfather, William J. Edick of Ravena; her beloved feline companion, Keoko; as well as many aunts, uncles, and cousins. She was preceded in death by her mother, Diane C. Edick; as well as by her grandparents, Margaret Edick, and Arthur and Irene Williams. Relatives and friends are invited and may call on Thursday, April 28, from 11 a.m. until 12 p.m. in the chapel of Babcock Funeral Home, 19 Pulver Ave., Ravena. Funeral services will follow, with the Pastor Frank Mircco presiding. Interment will follow in St. Michael's Meadow in the Calvary Cemetery, 481 Route 9W, Glenmont.

Gloria Christine Edick, 27 of Feura Bush, passed away on April 19, 2022. She was born on November 24, 1994, in Albany to David and Diane (Williams) Edick. Gloria attended local schools, and graduated with her bachelor's degree in political science... View Obituary & Service Information

The family of Gloria C. Edick created this Life Tributes page to make it easy to share your memories.

Gloria Christine Edick, 27 of Feura Bush, passed away on April...

Send flowers to the Edick family.