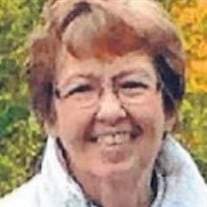 Joan M. Brandow, 89, passed away on September 2, 2021. Born in Albany in 1932, she was the daughter of the late Leslie R. Dolhof and Edith Mondore Dolhof. She resided in Albany for most of her life before moving to Glenmont. Joan graduated from Vincentian institute in 1950, and met her husband, George, on a blind date shortly thereafter. They married in 1953. She worked for the New York State Public Service Commission for 11 years, lastly as secretary to the commissioner. She left in 1961, to be a stay-at-home mom during her children's formative years. She felt so fortunate that she was able to do this and considered it her most enjoyable and rewarding "job." In 1975, she returned to New York state service becoming secretary to the commissioner of the New York State Office of Mental Retardation and Developmental Disabilities. She continued as his secretary in the executive chamber. After he was selected to be Governor Carrie's director of state operations, she eventually returned to OMRDD. As a result of the prep program, she was promoted to an administrative analyst and retired from there in 1990, as a program research specialist. Upon her retirement, she and her husband enjoyed cruising, golfing, bowling, playing bridge and traveling within this country and abroad. For more than 20 years they spent the winter months at their second home in Lakeland, Fla. Joan also served as a St. Peter's Hospital visitation minister for the parish of Mater Christi. She is survived by her loving husband of 67 years, George R. Brandow; and her three devoted children, Sharon L. Bridgeman (Patrick) of Lakeland, Fla., Deborah J. Baldwin (Jody) of Green Island, and James G. Brandow (Wendi-Jill) of Glenville. Also surviving are five grandchildren, whom she adored and who gave her unending joy and love, Stefani Wolfson, David Wolfson (Taylor), Brianna Jager (Matthew), Luke Brandow, and Olivia Brandow. Joan also adored her three great-grandchildren, Mason Jager, Mariella Jager, and Chase Wolfson. Joan was predeceased by three brothers, Leslie J. Dolhof, Ronald L. Dolhof, and Robert Dolhof, who died as an infant. The family would also like to thank Community Hospice, Laura, Chaplain Doug, and Varsha for their compassionate care in Joan's final days. Visitation will take place on Wednesday, September 8, from 5-7 p.m. in the Daniel Keenan Funeral Home, 490 Delaware Ave., Albany. Her funeral Mass will be celebrated on Thursday, September 9, at 11 a.m. in The Parish of Mater Christi, 40 Hopewell St., Albany. Masks are required. Entombment will follow the Mass in the Mausoleum of Saint Agnes Cemetery in Menands. At Joan's request as a two-time cancer survivor, and in lieu of flowers, those who wish may make contributions in her memory to the American Cancer Society, 1 Penny Lane, Latham, NY, 12110 or to St. Jude Children's Research Hospital, 501 Saint Jude Pl., Memphis, TN, 38105.

Joan M. Brandow, 89, passed away on September 2, 2021. Born in Albany in 1932, she was the daughter of the late Leslie R. Dolhof and Edith Mondore Dolhof. She resided in Albany for most of her life before moving to Glenmont. Joan graduated from... View Obituary & Service Information

The family of Joan M. Brandow created this Life Tributes page to make it easy to share your memories.

Send flowers to the Brandow family.