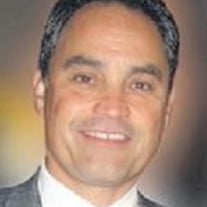 John Finley Tattersall, 63 of Clifton Park, passed away peacefully on August 13, 2021, surrounded by his loving family after a courageous battle with mesothelioma. Born on May 5, 1958, in Pittsburgh, Pa. to the late John and Ann Tattersall, he was raised in Mt. Lebanon, Pa. A born leader, he served as the head of his church youth group throughout his early years. John thrived off of competition in every aspect of his life, especially athletics. As a graduate of Mt. Lebanon High School, he excelled at every sport he played, notably lettering in football. John earned his bachelor's degree in chemical engineering from Penn State University. A proud Penn State graduate and member of the Tau Kappa Epsilon (TKE) fraternity, he developed friendships which would last a lifetime, but no moment could surpass the night he met his future wife Laureen at a fraternity-sorority social. Upon John's graduation, their fairytale love story lived on through a series of handwritten love letters until Laureen graduated two years later. They married in 1982 at St. Paul's Cathedral in Pittsburgh, eventually settling in Clifton Park where they would go on to raise their family for over 35 years. John purchased a local business, Frank Murken Products, in 2008 and served as the company's president throughout his successful tenure. He previously served as president of Lydall Corporation, president and chief operations officer of Decora Industries, and held various senior management positions with Dow Chemical and General Electric. One of John's many passions was community leadership. He held the positions of president of the Edison Country Club, board chair of Junior Achievement of Northeastern New York, chairman and president of Chief Executive Network of Northern New York (CEN), board member of the Center for Economic Growth, chairman of Industrial Distributor Cooperative (IDCO), regional representative for the Parker Distributor Advisory Council (DAC), board member of the local YMCA, and member of the Albany Vistage Executive Peer Group. By far, John's greatest joy came from spending time with his family. He would always say that his family was his greatest accomplishment. His grandchildren became his inspiration later in life and he took every opportunity to play with them. His love for sports continued throughout his life, as a spectator, coach and an avid golfer himself. He jumped at every opportunity to coach his children's sports teams. He was a loyal fan of his Pittsburgh Steelers, Penn State Nittany Lions, and New York Yankees. He traveled the world for both work and pleasure and greatly enjoyed taking his family and friends to Lake George on his boat. With his one-of-a-kind smile, big laugh, and a calming presence, he lit up every room he was in. There are no words to express how much he will be missed, but he will live in our hearts forever. Beloved husband for 39 years of Laureen (Valli) Tattersall. Loving and devoted father of John, Ashley (Michael) Parachini, and Alyssa Tattersall. Loving Papa of Marlina, Margo, and Jack Parachini. Dear brother of Tom (Karen), David (Shelley), and Amy Tattersall. He is also survived by many loving siblings-in-law, nieces, nephews, and cousins. Family and friends will be received at Glenville Funeral Home, 9 Glenridge Road, Scotia (518-399-1630) on Sunday, August 22, from 1 to 3 p.m. and 4 to 8 p.m. A Mass of Christian Burial will be celebrated on Monday, August 23, at 10 a.m. in St. Edward the Confessor Church in Clifton Park. Burial will follow in Most Holy Redeemer Cemetery, Niskayuna.

John Finley Tattersall, 63 of Clifton Park, passed away peacefully on August 13, 2021, surrounded by his loving family after a courageous battle with mesothelioma. Born on May 5, 1958, in Pittsburgh, Pa. to the late John and Ann Tattersall,... View Obituary & Service Information

The family of John S. Tattersall created this Life Tributes page to make it easy to share your memories.

Send flowers to the Tattersall family.