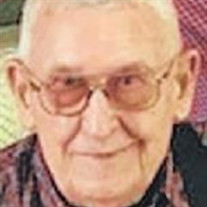 Joseph F. Buff, 88 of Latham, the beloved husband of the late Dorothy Van Sleet Buff, passed away peacefully on Wednesday, April 27, 2022. Born in Winona, Minn. on June 7, 1933, he was the son of the late Dr. Joseph A. and Frances (Storms) Buff. He earned his bachelor's degree and master's degree from Siena College in Loudonville. Joseph married the former Dorothy Van Sleet on June 12, 1954, cherishing 55 years of marriage before her passing on October 1, 2009. Joseph was a science teacher at East Nassau Central School, Watervliet High School, and Shaker Junior High School, teaching for a total of 33 years before retiring in 1988. He was a parishioner of Our Lady of the Assumption Church in Latham, and in his free time enjoyed hunting, fishing, and golfing. Survivors include his four loving children, Kathy Buff, Joseph D. (Kathleen) Buff, Dr. Christopher (Dr. Cheryl) Buff and Marlene Buff. He was the brother of Louis (Kathleen) Buff, Bernard (Roberta) Buff, Mary (Paul) Mantica, Martin (Suzanne) Buff, Robert (Noreen) Buff, Michael Buff, Susan (William) Ciejka, Barbara Burns and Paul Buff. He was the cherished grandfather of Kaitlyn, Kelly, Sarah (Mark) Libertucci, Rachel (Charlie) and Daniel (Nicole); and his great-grandchildren, Lincoln and Cecelia Libertucci. He is also survived by his sister-in-law, Beverly Buff; many nieces, nephews and his cherished friend and companion Linda Green. Joe was predeceased by his brothers, Frank and Jerome; and sisters-in-law, Joyce and Rosemary. The family would like to express their sincere thanks to Dr. John Pezzulo with whom Joe had a very special 30-year relationship. Relatives and friends are invited and may call on Sunday from 2 to 4 p.m. at the Dufresne & Cavanaugh Funeral Home, 149 Old Loudon Road, Latham. The family requests that mask are worn while in the funeral home. A Mass of Christian Burial will be celebrated on Monday, May 2, at 10 a.m. in Our Lady of the Assumption Church, 498 Watervliet Shaker Road, Latham with Reverend Geoffrey Burke officiating. The funeral Mass will be livestreamed at olalatham.org/youtube-channel-2. Interment will take place next to his wife in St. Agnes Cemetery, Menands. In lieu of flowers, memorial contributions may be made in Joseph's memory to Our Lady of the Assumption Church, 498 Watervliet Shaker Rd, Latham, NY, 12110 or the Saratoga Hospital Foundation, 211 Church St., Saratoga Springs, NY, 12866.

Joseph F. Buff, 88 of Latham, the beloved husband of the late Dorothy Van Sleet Buff, passed away peacefully on Wednesday, April 27, 2022. Born in Winona, Minn. on June 7, 1933, he was the son of the late Dr. Joseph A. and Frances (Storms) Buff.... View Obituary & Service Information

The family of Joseph F. Buff created this Life Tributes page to make it easy to share your memories.

Joseph F. Buff, 88 of Latham, the beloved husband of the late...

Send flowers to the Buff family.