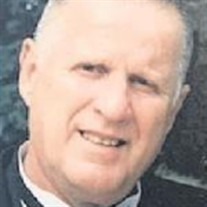 Peter Albert Myers, 86, died peacefully on July 5, 2020 in Jupiter, Fla. Born on June 30, 1934, in Albany, he was the eldest child of Willard Glazier and Ruth Theresa Myers. He graduated from The Milne School in Albany followed by Hobart College in 1957. He served in the U.S. Army Security Agency as a manual morse intercept operator in Kassel, Germany, and enrolled in the Massachusetts College of Optometry upon discharge. He received a direct commission as an optometry officer and served in the 364th General Army hospital as part of the U.S. Army Reserves in Albany. Peter had a private practice in Albany and Hudson for many years, retiring in 1994 to take care of his ailing mother. One of his patients set him up on a blind date with the woman who would become his wife 10 months later. A resident of Elm Estates in Selkirk for 37 years, Peter was the unofficial "Mayor of Linton Street." He was an aficionado of Big Band music, and he would share his collection with local and national radio stations. He had a passion for the perfect buttercream frosting and amusing his grandchildren by threatening them with a million hugs and kisses. Although rather quiet by nature, he could strike up a conversation with anyone and made a connection with someone wherever he went. Peter will be remembered for his deep love of family. Peter is survived by his wife of 52 years, Rosemary; and their three favorite daughters, Laura (John) Powell of Sacramento, Calif., Lisa (William) Paczkowski of Jupiter, Fla., and Carolyn (Christopher) Lewey of Chatham, N.H. He will be missed by his seven beloved grandchildren, Conor Hilts and Devin Powell of California, Alexander and Jenna Paczkowski of Florida, and Andrew and Reid Irwin and Charlie Lewey of New Hampshire. He is also survived by a brother, Willard Glazier Myers Jr., of Discovery Bay, Calif.; a sister, Carol Theresa Wade of Poughkeepsie; five nephews, a niece, and their children. Services will be held at a future time when it is safer to gather and burial will be in the mausoleum in the Albany Rural Cemetery. In lieu of flowers, Peter requested that donations be sent to St. Jude Children's Research Hospital.

Peter Albert Myers, 86, died peacefully on July 5, 2020 in Jupiter, Fla. Born on June 30, 1934, in Albany, he was the eldest child of Willard Glazier and Ruth Theresa Myers. He graduated from The Milne School in Albany followed by Hobart College... View Obituary & Service Information

The family of Peter A. Myers created this Life Tributes page to make it easy to share your memories.

Send flowers to the Myers family.